The people in these photographs are not featured in the story below. These photos are from the series Old people in the park by Ryan Harding. Underneath the article you can read more about the images, shot in parks nearby Shanghai.

From her front door, Ida Millman can see the sun shining outside. "There are two big old Winged Euonymous in full flame – gorgeous!" she recently emailed me. Ida first connected with me after reading one of my newsletters. Read the newsletter here. We have since exchanged notes about our families, our journeys through depression, and what we do to find peace. We seem to understand each other – even though Ida is almost three times my age.

“Depression… has disrupted my life for 75 years,” she wrote in her reply Read Ida’s complete comment here. to the newsletter. “I’m 93 now and have spent the last three unknotting the events that caused the dis-ease [her spelling].”

Angharad Hughes, a retired lawyer, is 60. “I’m no longer working because of post-traumatic stress disorder, depression and anxiety,” she said Angharad’s full comment is here. in response to another of my posts. “As I’ve got older I’ve been less ashamed about my mental health, and there have been fewer practical reasons for hiding it (particularly now I am no longer working), and I hope I can encourage people in my circles to be similarly open.”

In the one month that The Correspondent has been live, several senior citizens such as Ida and Angharad have spoken up about living with depression. In the process, they pushed me to ask a question that I’ve scarcely considered before: why is so much of the public discourse around depression entirely about younger people?

“We first need to acknowledge that it is a problem”

Mainstream (English-language) media is increasingly interested in mental illnesses, and depression together with anxiety disorders occupies the largest share of stories on this subject. And yet, reports on depression appear to have little space reserved for the elderly people – even if you are the Archbishop of Canterbury.

On 18 October, The Guardian published a story on 63-year-old Justin Welby’s revelation that he has suffered from depression – but not without a prominent mention that it was his daughter’s “honesty about illness” that encouraged him to open up.

Depression, easily mistaken for sadness or ennui or plain rancour, tends to be brushed off as a natural byproduct of ageing.

A senior Indian healthcare journalist who spoke to me on the condition of anonymity because he is not authorised to talk to the press points out a truism: for a problem to capture public attention, the first step is to acknowledge that it is a real problem. With depression in older people, even this basic process is yet to begin.

Older adults are vulnerable to a range of losses – loss of self-sufficiency, for instance – which predisposes them to depression, says Amit Malik, who has worked as a consultant psychiatrist for older adults with the UK’s Surrey and Borders Partnership NHS Foundation Trust and now runs the mental health platform Inner Hour in India. "But elderly psychological problems are often [under represented] due to therapeutic nihilism," which is the idea that it is impossible to cure illnesses through treatment.

Depression, easily mistaken for sadness or ennui or plain rancour, tends to be brushed off as a natural byproduct of ageing. "So there are very high rates of unidentified and unresolved depression in this demographic," Malik adds.

Depression is in fact the most common mental disorder in the 60+ age group.

The two ailments most frequently associated with ageing are, predictably, heart disease and cancer. Among mental or neurological problems – which account for 17.4% of years lived with disability among those aged 60 and above, according to the World Health Organization (WHO) – dementia, Alzheimer’s, and Parkinson’s dominate the conversation. If you scroll through the homepage of the US’ National Institute on Aging Check out the US National Institute on Aging page here. under the Department of Health and Human Services, for instance, you will find only these three diseases named explicitly.

This perception is so entrenched that I was surprised to learn that depression is in fact the most common mental disorder in the 60+ age group, affecting approximately 7% of this population around the world as per WHO estimates.

One reason for our insufficient appreciation of depression’s toll on older adults and the emphasis on youth could simply be that the disease strikes early in life. The WHO says Check out the WHO fact sheet on adolescent mental health here half of all mental health conditions start by 14 years of age. Globally, depression is one of the leading causes of illness and disability among adolescents. Suicide is the third leading cause of death in the age group of 15-19 years.

A US study quoted in Psychology Today Here’s the complete article, which quotes the work of the psychologist Jean Twenge. showed a 71% increase in serious psychological distress in young adults and a 52% increase among adolescents aged 12 to 17 between 2008 and 2017. Mood disorders and suicide-related outcomes show no such trends among adults aged 26 and over, the article states.

Ageism is a structural problem

To be sure, the depression conversation isn’t unique in its bias for younger subjects. One of psychology’s worst kept secrets is how for decades, researchers in the US propagated theories on the human mind based on a single sample population: North American college students.

"We’d be aghast if the FDA approved a drug, for instance, upon a biased sample made up of people not representative of those who might end up being prescribed the drug. But apparently psychology has been getting away with something far less than this gold standard for decades," writes psychologist John M. Grohol in the mental health resources portal PsychCentral. Read Grohol’s critique of this practice here. Grohol says this bizarre practice has grown roots because of reasons such as "laziness" and "tradition".

Mass media has its own logic. In my previous life as a business journalist, we often used to joke that the easiest way to sell a story is by somehow making it about millennials – the sexy demographic blessed with pop-culture currency, and characterised by its access to disposable income, willingness to spend, and propensity to consume media.

The images and words that have been attached to growing old are overwhelmingly about an "expected sadness".

By contrast, "retirement, not being seen as a productive part of the population, and being expected to fade into the background are compelling reasons for the marginalisation of the elderly", says Chaitali Sinha, a psychologist with Wysa, a mental-health platform in Bengaluru, India, Read more about Wysa in my newsletter on the use of technology in mental health care startups. that has over a million users around the world.

This kind of ageism could be more troubling in a country like India, which loves to play up its young population and "demographic dividend", as opposed to, say, Japan, where older people are a much larger cohort. Japan’s ageing population has its own crisis: loneliness. Read more about it in The New York Times.

Then there’s the question of who gets to tell these stories. Age (and gender) discrimination are an alarming if unspoken reality in newsrooms. Read more in this article also from The New York Times. Even in a public square like Twitter, which has become a prime source of #trending story ideas for journalists and has a vocal community of depression survivors, it’s hard to find too many older people sharing stories – because Twitter simply isn’t a place for them. According to one survey, Read the survey on Statista. in July 2019, only 13.3% of Twitter users were over 50, compared with over 58% in the 18-34 age group. This echo chamber effect would explain why so much of the chatter around depression focuses on ills typically associated with younger people, such as screen and social-media addiction.

The other culprit could be the unique economics of health reporting, and the space occupied by stories on ageing within it. One analysis from 2005 Read more on ageing research in the media here. that still feels valid observes: "Stories about ageing have to fight for space – the space left over when all the advertisements are laid out – against stories about natural disasters, scandals and the British royal family." This battle to grab eyeballs explains the proliferation of clickbait stories about how to prevent the appearance of ageing at the expense of other themes.

The conversation about depression must make room for everyone’s struggles and what helps them carry on.

Films have an even more problematic tendency to botch up the portrayal of ageing. A 2016 analysis of the previous year’s 100 highest grossing US films Read the key findings of the study here. by the USC Annenberg School of Communication and Journalism revealed that nearly 80% of on-screen deaths of characters aged 60 and above were caused by physical violence — such as being shot, stabbed or crushed. This is far from an accurate reflection of the leading causes of elderly deaths in the real world: heart disease and other chronic illnesses.

Also, of 57 films that featured a leading or supporting character in this age group, over half resorted to ageist descriptions such as "a relic", "a frail old woman", and "a senile old man". The images and words that have been attached to growing old are overwhelmingly about an "expected sadness", agrees Sinha of Wysa. "Positive [imagery] is treated as an anomaly."

Ultimately, the depression conversation must go beyond just words and images. It is of little use if it can’t empower people – irrespective of age and other biologically or socially imposed labels – to live with dignity and assert their right to care. When that happens, maybe the need for the conversation itself will diminish. As 50-year-old Babette Heebink, Read Babette’s comment here. another member of The Correspondent, says, "I found out that if the help I get really helps, the need for talking about it dissipates."

But until that overhaul takes place, the conversation must make room for everyone’s struggles and what helps them carry on – including flaming red flowers outside the doors of 93-year-olds. 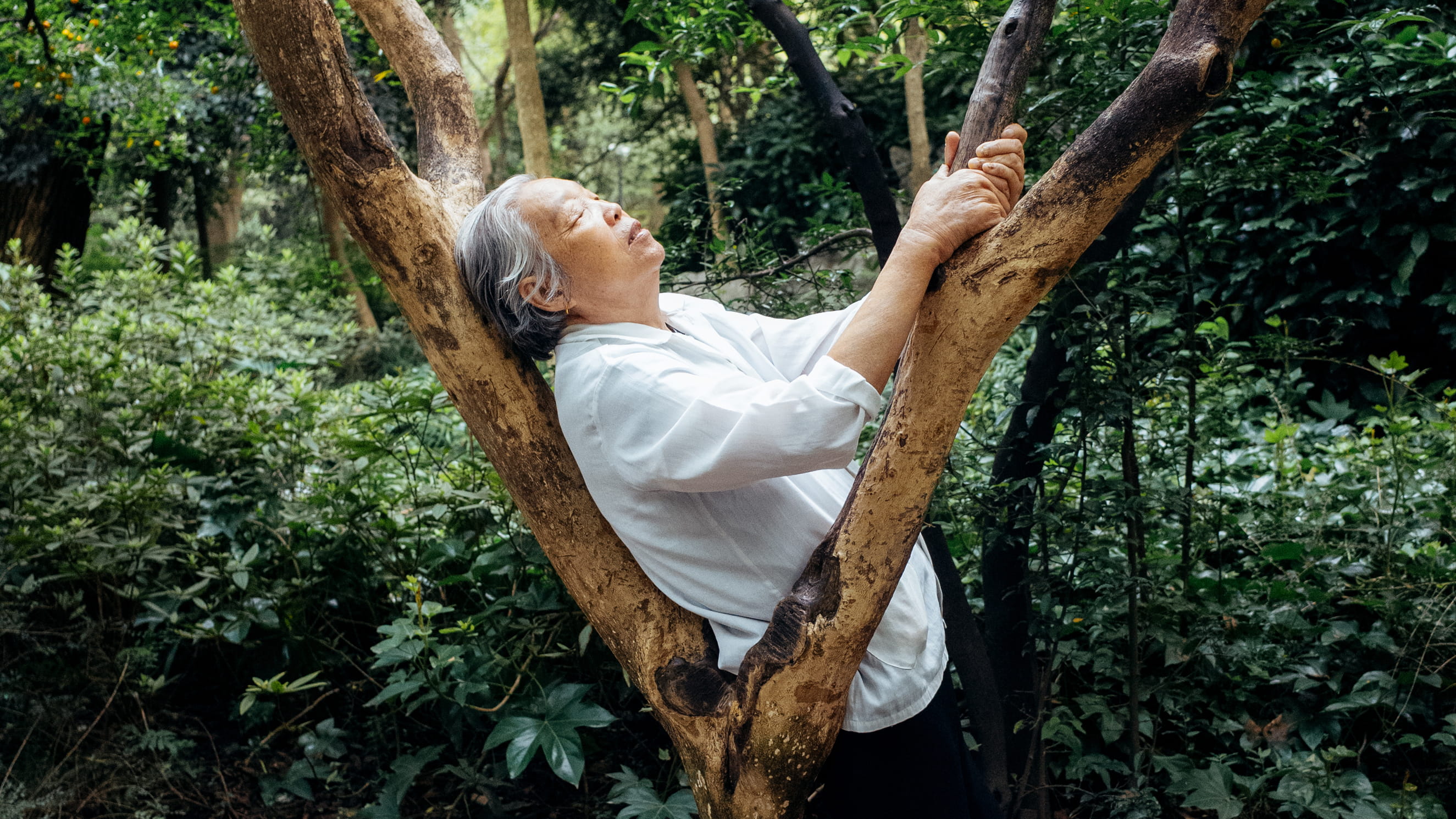 About the images Ryan Harding, a young photographer, is well-acquainted with the Chinese city of Shanghai. He decided to explore the less densely populated areas around the city, and started visiting random parks. To his surprise, he encountered many elderly people there, huddled in their own communities, chatting and playing mahjong; others just by themselves exercising, resting or watching other people. Harding’s series shows the elderly in a way we might not often see in the media: playful, full of life, and maybe a bit silly at times – changing the narrative. See more work by Ryan Harding 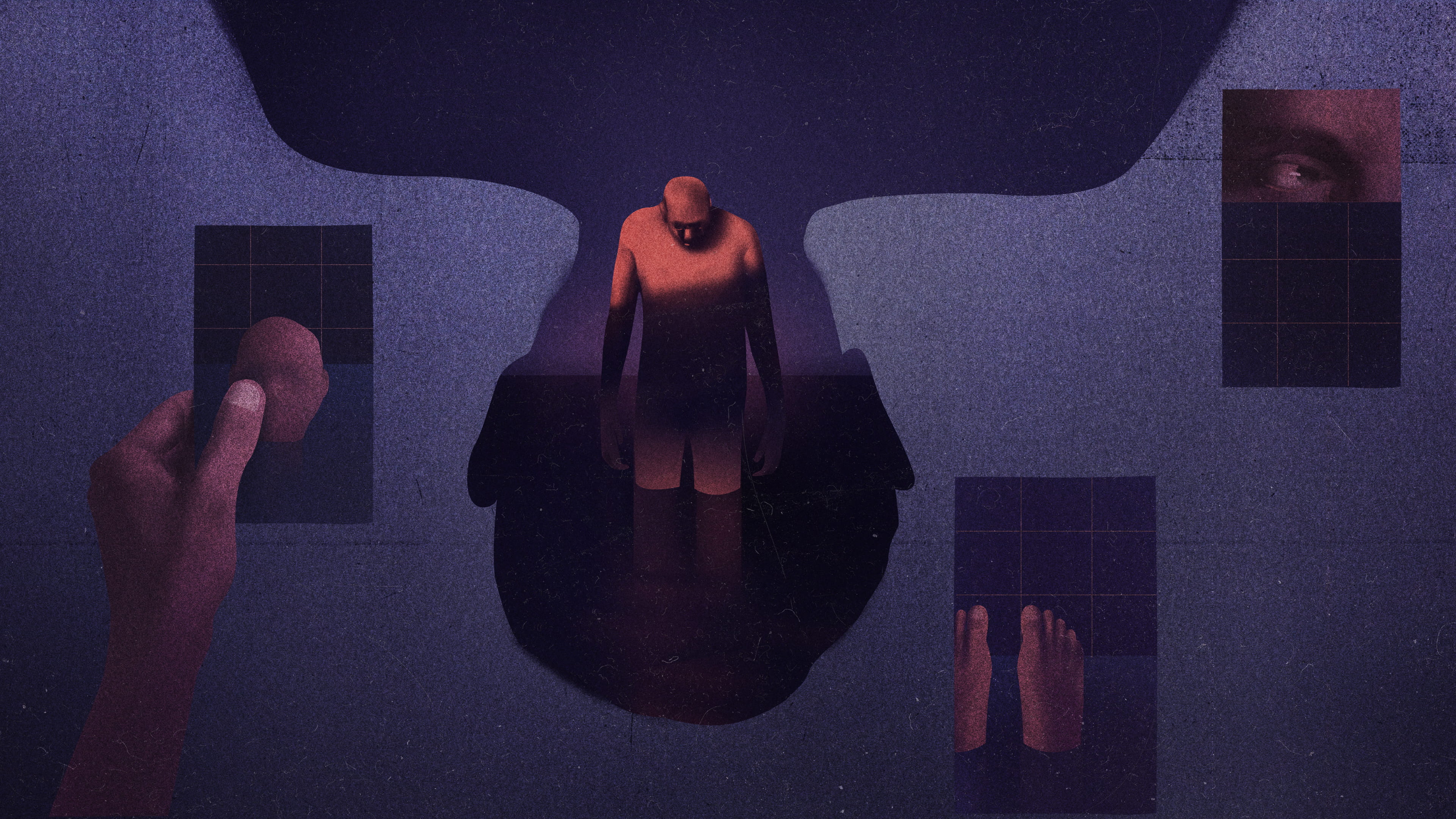 Can guilt and shame ever be positive? Few emotions are as inseparably fused with what it means to be human. We need to understand both better. Read more here