I recently saw your new film, A Life on Our Planet – a beautiful, harrowing documentary about the global decline of our natural ecosystems. It’s a bitter pill with a sweet dessert: a possible way out of this mess. I couldn’t help but choke on that dessert – because you suddenly mention the Netherlands as a leading example for the rest of the world.

As a Dutch person, this would be a great honour, if it weren’t for the fact that you are gravely mistaken.

Your reasoning is as follows. We humans are cultivating more and more land for agriculture to support our growing global population, thereby destroying natural ecosystems. The most important example is a seemingly endless succession of palm oil plantations in Borneo, built at the expense of the richest nature on Earth, including orangutans, our siblings in the canopy.

So, you say, we need to focus all our energies on cultivating more food on less land. “The Dutch have become experts at getting the most out of every hectare,” we hear you say with your familiar eloquent tone. “Despite its size, the Netherlands is now the world’s second largest exporter of food.”

According to you, the Netherlands has increased its production tenfold, while using fewer pesticides and artificial fertilisers, with lower CO2 emissions. We see tomatoes growing in futuristic greenhouses, and even vertical farming: heads of lettuce growing one above the other, 10 storeys high, illuminated by purple LED lighting.

But the fact that we are champion exporters is not because we pile heads of lettuce on top of each other or because we grow sustainable sci-fi tomatoes.

The “food product” that makes us champion exporters doesn’t taste good: it’s flowers. We are actually focusing all our energies on supplying the growing global population with flowers!

That requires heaps of artificial fertiliser Read ‘The most important invention of the 20th century keeps us alive but is killing the environment. The solution? Eat less meat’ and CO2. And thanks to horticultural exports, the Netherlands uses the largest amount of pesticides per hectare in all of Europe.

If we don’t count flowers, the Netherlands isn’t the second largest exporter of food: Germany is. The fact that you do include flowers is probably because you got your information from an often-cited article Read it here in National Geographic, which makes the same mistakes.

Even so, we do export a lot of food, so this isn’t the most important fact you missed. The point is: the Netherlands is cheating. We have two tricks that allow us to export so much food with so little land use. And as a Dutch ecologist, I’m afraid to say they have nothing much to do with the conservation of biodiversity.

The first trick: 30% of our exports aren’t actually grown in the Netherlands. In fact, we import them first. This is known as “re-exportation”. And the Netherlands may be fertile, but many of the raw materials for the other 70% also come from abroad.

For its own consumption alone, the Netherlands uses two and a half times more agricultural land than the country possesses. That’s not because we pile crops on top of each other in towers: that land is situated in other countries.

Guess where all that palm oil from Borneo goes? The Netherlands.

After India and China, the Netherlands was the biggest palm oil importer in 2019. Unilever, one of the world’s biggest food multinationals, uses this palm oil to make supermarket products for the whole of Europe, in Dutch factories. Unilever puts oil in practically everything, from bread and peanut butter to shampoo and mascara. And palm oil is the cheapest oil on the global market. Even in formula for babies, milk fat is replaced by palm oil.

All that processed food: that would be number four in the list of Dutch export products. This year, too, Unilever was involved in further deforestation in Indonesia.  Read on Greenpeace ‘Burning down the House: How Unilever and other global brands continue to fuel Indonesia’s fires’

The second trick is fossil fuels. Although there is a much higher yield per square metre of agricultural land than 50 years ago, the efficiency of the production process has collapsed. In 1950, every 100 joules of fossil fuels that Dutch farmers used yielded 107 joules of nutritional value thanks to ecological processes, but nowadays, that ratio is only 100 joules of fossil fuels to 6 joules of nutritional value. All that energy goes towards the production of artificial fertiliser, building barns, driving tractors and transporting all the food. And we don’t eat the bulk of it ourselves; it’s feed for livestock.

We use two-thirds of all agricultural land to grow grass to feed for our cows. They get a supplementary 10-20% in the form of protein concentrates, the majority of which come from outside Europe: soy and palm kernel shells.

This brings us to our second and third largest agricultural export, after flowers: meat and dairy. Cheap pork and milk for Germany and the UK.

As an ecologist, it hurts me gravely to see that the nature around me is in steady decline

I don’t have to tell you about the disastrous effects of bio-industry on the climate and biodiversity; you talk about this in your documentary. Thanks to all the cheese and cutlets, the Netherlands is also a leader when it comes to biodiversity loss.

As an ecologist, it hurts me gravely to see that the nature around me is in steady decline. In the last century, meadows were a major source of Dutch pride, housing many kinds of wild plants and insects and amazing population densities of breeding meadow birds.

Thanks to agricultural nitrogen pollution and monocultures, we have only retained 15% of our original biodiversity. If this continues in the same vein, it spells the end for our most iconic meadow bird, the black-tailed godwit. The common snipe, redshank and ruff, once so common, now barely breed in the Netherlands anymore. If left to us, those birds would be extinct.

Increasing food production in itself doesn’t reduce the number of undernourished people globally, but merely leads to more lower quality products at throwaway prices, and an increased consumption of luxury products by people who already had more than enough to eat. Read on EuroNews ‘Europeans eat twice as much meat as the global average’ The bulk of Dutch exports goes to other European countries, all of which also consume more meat and dairy than is good for them.

The problem with greenhouse horticulture

And now we finally get to the tomato greenhouses. Our fifth-largest agricultural export, after flowers, meat, dairy and processed goods, is vegetables. About half of the export value of fruit and vegetables comes from greenhouse horticulture, and that accounts for only 4% of our total agricultural exports. Most of this also goes to other European countries.

You rightly point out that greenhouse horticulture is becoming more and more sustainable when it comes to the use of pesticides, water and fertilisers. This is encouraging, but unfortunately greenhouses are expensive to build, and they are by far the most energy-intensive sector in the Netherlands, much more intensive than the steel industry. Greenhouse horticulture takes up 10% of all Dutch natural gas consumption – the same amount as half of all Dutch housing. Greenhouse horticulture accounts for 80% of all the energy used for agriculture. Economically, this is only possible because it is subject to a lower energy tax rate.

Why do greenhouses get a reduced rate? Because otherwise they’d have to pay an enormous amount of energy tax.

There’s no point even talking about vertical farming because that requires even more energy, and it can’t be switched off. LED lighting is relatively economical (although it has nothing on sunlight, which is free), but that’s merely promotional chatter. Its benefits are instantly negated by the number of lamps, enormous dehumidifiers and air conditioners these constructions require.

A world full of wind turbines – why not?

If you want to feed the global population with tomatoes and lettuce from greenhouses and vertical farms without fossil fuels, then the world would have to be full of wind turbines. Maybe you already knew this, because that’s exactly what we see in your vision of the future: a Sahara full of solar panels, and endless grassy plains with ambling herds of wildlife grazing under the swish of wind turbines. The Lion King goes 21st century.

You mention population growth, which is mainly taking place in Africa, as the leading cause of increasing food consumption. But what about ourselves: the enormous and ever-increasing consumption per person in western countries? On average, Europeans consume seven times as much energy and six times as much meat Read more about worldwide meat consumption here as Africans, and both numbers keep rising.

In Africa, too, energy consumption is rising (meat consumption is barely increasing; in fact, it is declining in a number of countries), but I was hoping that we had by now moved on from a time when Europe shifted the responsibility for its problems on to Africa. Even if the African population and the average consumption per African doubled, they would still be below our levels of consumption. Why would we point at them and not at ourselves?

And why do you situate these energy parks in two of the world’s biggest, largely intact natural ecosystems? You say it would help nature, but I can’t figure out how Simba would profit from wind turbines.

Dear Sir David Attenborough, very few voices are heard as widely as yours. By praising Dutch exports, you are only repeating our food industry’s marketing slogans. Please stop. Argue for hard measures to curb our own consumption. Hold food giants like Unilever to account. Condemn agriculture that comes at the expense of biodiversity. Not only in Borneo, but also in the Netherlands, and on your own island of Britain.

If Europe were to make it part of its policy to halve meat and dairy production in favour of seasonal vegetables, we would be able to manage without exports from outside Europe, while promoting healthier living and environmentally friendly farming. And the European Union has that power, because it has been determining farmers’ choices for decades, with a cash injection that constitutes almost 40% percent of the total EU budget. It’s a choice.

And with wild flowers and birds in our meadows, we would no longer need to cut flowers to remind us of the beauty of nature. That’s not a utopian vision. There are still farmers in the Netherlands who show us that it is possible.

You are 94 now. I hope you live a long life, but we need to hurry up and make sure we can manage without new David Attenborough films in the future.

This article first appeared on De Correspondent. It was translated from the Dutch by Hannah Kousbroek. 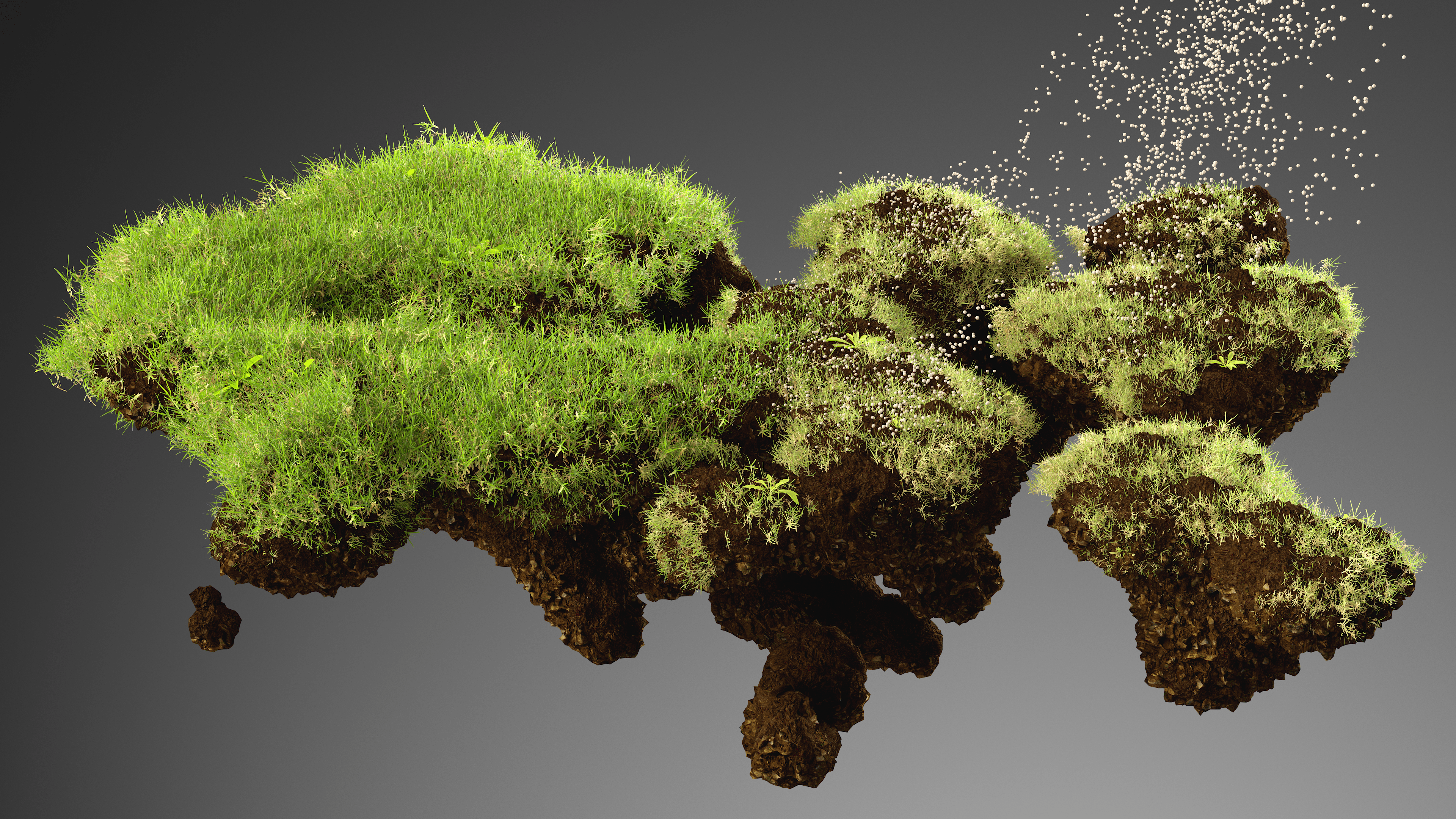 The most important invention of the 20th century keeps us alive but is killing the environment. The solution? Eat less meat Thanks to an invention in 1909, we now have a world population of almost eight billion people. It keeps half the world’s population alive while wreaking environmental havoc. But we can plant the seeds of positive change by reducing our meat consumption. Read Maikel Kuijpers’ article here