From the series Empty Bottles by artist duo WassinkLundgren

On the first Tuesday of September, a 20-metre section of Amsterdam’s Grimburgwal quay wall – plus a lamppost – tumbled into the canal just outside the University of Amsterdam. The lamppost, in particular, seemed to capture the public’s imagination, and was featured in all media accounts of the collapse. You can read more about the collapse here No one was injured, but the accident was unnerving just the same.

And yet it was hardly surprising: since the 1980s, the Netherlands’ capital city has invested far too little CNN: ‘Amsterdam has been collapsing for years. Now it’s paying the price’ in maintaining its 600km of quays and embankments and its 1,800 bridges. As a result, Amsterdam’s canal walls have begun to crumble and even collapse in places, and the city has been forced to make emergency repairs to stave off disaster.

An independent review commissioned by city officials early last year spelled it out clearly: Amsterdam’s infrastructure has been shockingly neglected, and now the city is reaping what it has sowed.

As it happens, Amsterdam is hardly exceptional: all over Europe, the maintenance of roads and bridges is barely a priority. The results of this neglect can be deadly, as in the Italian city of Genoa, where 43 people were killed when the Morandi Bridge collapsed in 2018. The US, too, struggles with infrastructure maintenance. Multiple bridges and overpasses have collapsed there in recent decades, and the metro networks in Washington DC and New York City are in such terrible shape that delays have become the norm, with occasional injuries and even fatalities.

Amsterdam’s deputy mayor Sharon Dijksma (responsible for traffic and transport), who commissioned the independent review of Amsterdam’s infrastructure and raised the alarm about the sorry state of the city’s bridges and canals, says that the neglect is somewhat understandable. After all, she said, “maintenance is not a sexy subject”.

Think about it: maintenance is a form of long-term commitment, while politicians stand to gain much more by focusing on the short term. It’s pretty invisible, too: we tend not to even notice it unless it inconveniences us personally. And it lacks allure – politicians looking to curry favour with their constituents are better off announcing a new community centre or extra funding for the arts rather than, say, a plan to shore up quay walls. When budget cuts are looming, infrastructure maintenance is often one of the first things to go, the idea being that no one will notice the difference.

No one will notice – until things go wrong.

What we miss out on when we obsess over innovation

In their new book Read more about the book on the publisher’s website The Innovation Delusion: How Our Obsession With the New Has Disrupted the Work that Matters Most, US historians Lee Vinsel and Andrew L Russell sum up what they call the “central paradox” of maintenance: “It is, simultaneously, both absolutely necessary and usually neglected.” The book, released a week after the Grimburgwal collapse, explores the reasons behind our tendency to neglect maintenance. Chief among them: our collective obsession with “innovation”, our hunger for novelty, and our all-too-human habit of prioritising the short term above the long term.

The authors make painfully clear what the consequences of this neglect can be, from collapsing bridges and slow-moving trains to homeowners who haven’t kept up with repairs and pray that they’ll be long gone before the roof comes crashing down on them.

Our society’s disregard for maintenance – and for related issues, like care and stewardship – isn’t limited to infrastructure, but extends into other areas of life as well. For example, many of us discard our devices and appliances at the first sign of problems because manufacturers make it so difficult to repair their products that it’s cheaper to simply replace them.

And then there’s the fact that people who perform maintenance or care work – cleaners, garbage collectors, mechanics, nurses – are often awarded lower social status. While jobs like these are essential to keeping our society running smoothly, they’re situated squarely on the lower rungs of the occupational ladder in terms of prestige. In addition, many of these jobs require working in high-pressure environments (as in the case of nurses and cleaners), often for little pay.

The pandemic has reminded us just how essential these types of work are, but it remains to be seen if our new-found appreciation will last.

Forgetting the importance of what we already have

In an effort to change the way we think about these issues, Vinsel and Russell founded The Maintainers, You can visit The Maintainers’ website here an international network of academics, engineers and maintenance experts who are passionate about maintenance. The Innovation Delusion is the result of five years’ research into a subject that might not be very sexy but is nevertheless essential.

Don’t be fooled by the title: the authors aren’t opposed to actual innovation, but instead take issue with what “innovation” has come to mean in many parts of the world over the last half century. For many governments and institutions, innovation is now an unquestioned good: if you want to grow, to flourish, to tackle any problems that may arise, then you have to “innovate”. Out with the old, in with the new. It’s a mindset that thrives on fear: the fear that our businesses, our cities, our nations will be left behind as the rest of the world advances. (Ironically enough, the pace of innovation has actually slowed since the 1970s; as innovation grew into a buzzword, we began doing less and less of it.)

In our relentless pursuit of newer, better things, we risk losing sight of what we already have – and of the importance of caring for it. The antidote to this “innovation delusion”, Vinsel and Russell argue, is to adopt a “maintenance mindset”: a way of looking at the world that focuses on what is good and worth preserving, rather than on what needs to change.

Seen from this perspective, it becomes clear that maintenance is a prerequisite for success (as it ensures that businesses, cities, and households will stand the test of time); that maintenance must be planned and cultivated; and that maintenance requires constant care and attention. When we look at the world with a maintenance mindset, innovation may become a means to an end but will never be a goal in and of itself. Keeping maintenance in mind also helps us to remember that every innovation, every new machine or metro line, will eventually need to be serviced or repaired.

The Innovation Delusion presents a variety of examples of what a maintenance mindset looks like in practice: a Canadian software company that designs computerised maintenance management systems and believes that “maintenance and sustainability go hand in hand”; volunteers who maintain open-source software; and a repair cafe in Christiansburg, Virginia, where people can learn to repair and maintain their own appliances. And the authors argue that people who do maintenance work deserve more recognition and better working conditions – goals that will become easier to achieve as more and more people develop a maintenance mindset.

The Innovation Delusion wraps up with a number of practical recommendations. For example, the authors advise consumers to consider the amount of upkeep involved before purchasing anything new and to consult websites like iFixit, which ranks products according to their repairability.

They also urge us to try and find joy in performing maintenance rather than putting it off: to learn to see mowing the lawn as a meditative exercise and shovelling snow as a communal effort that strengthens the ties between yourself and your neighbours.

Maintenance saves lives, resources, and the environment. It’s a prerequisite for growth and social cohesion.

Take pride in investing in your home’s upkeep, “knowing that you have taken care of and ensured the longevity of the place where your family spends most of its time”. According to the authors, this type of labour gives us a feeling of “maturity and responsibility”, emotions that have come to be “too little appreciated in our culture” but that can nonetheless be incredibly fulfilling.

The idea that maintenance isn’t “sexy”, as Amsterdam’s deputy mayor Sharon Dijksma put it, is something of a cliche. But perhaps we should stop and ask ourselves how relevant this observation really is – I mean, does anyone really think a new metro line is sexy, or an innovative new IT system? You know what’s sexy? Sex!

In all fairness, Dijksma went on to emphasise that maintenance, despite its unglamorous nature, remains “essential for the city”. She has since come up with an action plan for assessing the status of Amsterdam’s infrastructure – many bridges and quays have never even been inspected – and repairing, renewing or replacing things where necessary.

And she’s right: maintenance is essential. It’s about taking care of things and preserving what’s good. It connects us with one another, with our past, and with our future. It saves lives, resources, and the environment. It’s a prerequisite for growth and for social cohesion; it wards off danger and decay. And it’s an act of hope, an effort to preserve what’s valuable for future generations. For this reason, The Innovation Delusion is truly a hopeful book. And while that might not be sexy, it sure is exciting.

This article first appeared on De Correspondent. It was translated from the Dutch by Megan Hershey. 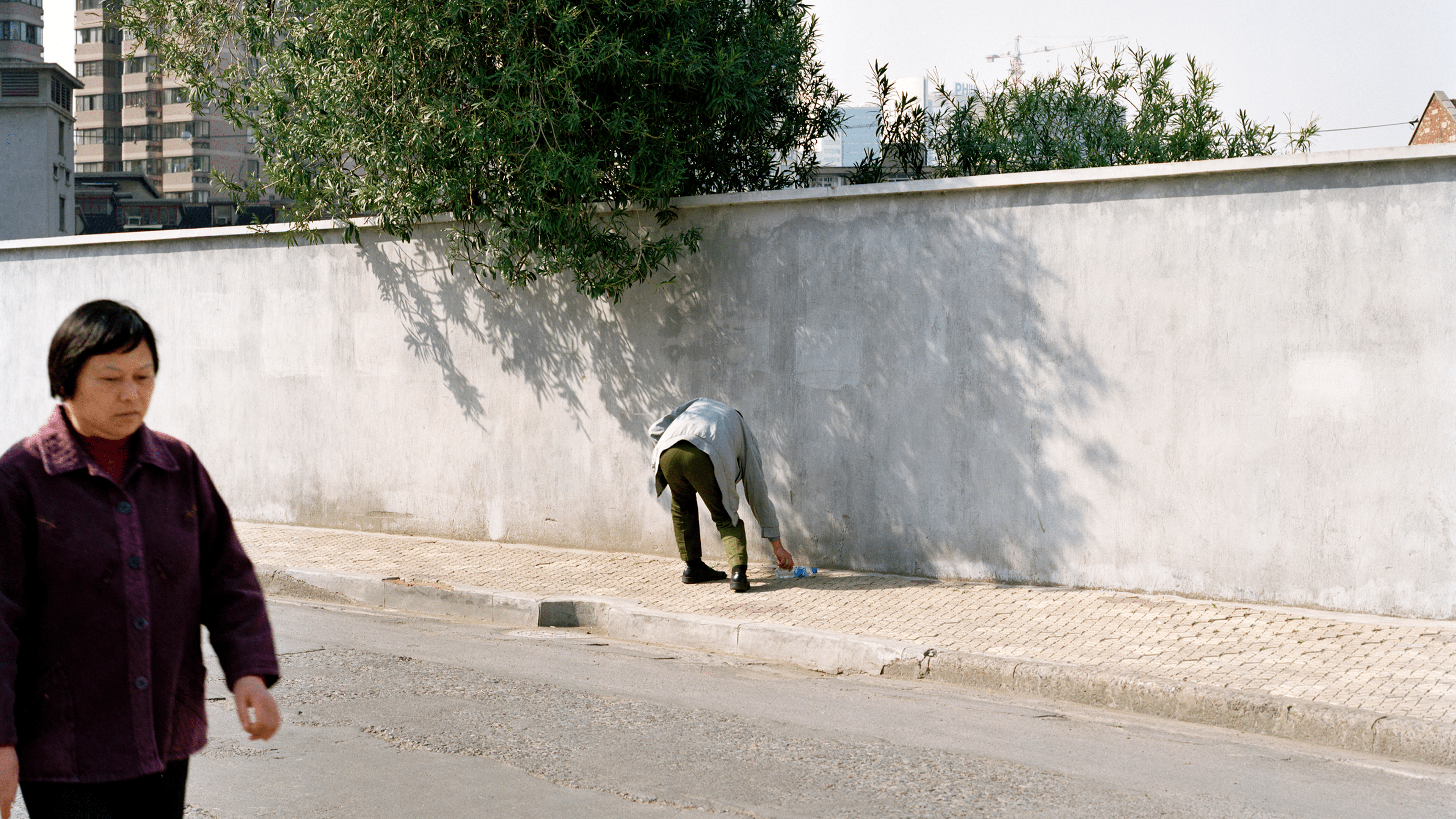 About the images About 15 years ago, Thijs Groot Wassink and Ruben Lundgren moved East to make a project about the Chinese economy. Packed with a technical camera, they roam the streets of Beijing and Shanghai, chasing ideas. During one of those walks, Ruben places a plastic bottle on a fence: a handy tool for focusing against backlight. But before he can print, the bottle is taken by a female passer-by. This is how the idea for Empty Bottles arose. A series of images of bent over occasional pickers, full-time seekers and cleaners. They pick up bottles that have been carefully placed by the artists in the otherwise immaculate city decor. (Isabelle van Hemert, image editor)

You used to have hobbies. Now you have to have an obsession Detoxing, house plants, healthy eating – we’re obsessed with obsessions. Obsessions promise perseverance, focus and success, without us having to do it all ourselves. But what do we stand to lose as a result of this modern addiction? Read my article here