104 airplanes, from the project Satellite Collections by Jenny Odell, for which she collected things that she had cut out from Google Satellite View - parking lots, silos, landfills, waste ponds. You can read more about this project at the end of the article.

In the past few weeks, we have seen changes in society that would have been unthinkable just last year. The coronavirus pandemic has trapped us indoors, deprived us of our normal routines, and unleashed a global economic catastrophe not seen since the second world war. This crisis has reshaped how we think about ourselves, rapidly transformed our values, and caused a surreal shift in time and space. Read about the psychological reasons why life in a pandemic feels so surreal. Suddenly, we are under siege from the stark reality of our immediate survival.

Even though our instincts and political leaders might be saying otherwise, it is more important than ever in this emergency to take the long view. If there was ever a moment to think about the future, it’s now.

The coronavirus has plunged the world headfirst into an era of unity, solidarity, and rapid societal change that looks like a compressed version of what climate scientists have been warning us about for decades. We are part of a living ecosystem, and if we push it too far, it will break. Read Tom Hollo in the Guardian on why ‘the age of disconnection is over’.

Looking around us, we can clearly see some of the cracks in society. We now know the status quo has failed. These sudden transformations are a collective trauma, Read about the overlap between climate grief and the coronavirus, by Mary Annaïse Heglar. argues climate justice writer Mary Annaïse Heglar. We are in mourning for a familiar world that has suddenly vanished. The old world is not coming back. There is a tangible sense of grief and loss. It’s a moment of triage for the entire planet.

There are striking parallels between this short-term fight against Covid-19 and the long-term fight for a stable climate. Most importantly: we know what the solutions are, we know that the solutions will work, and we know they must take place on an enormous scale. Our actions from this point will require a more compassionate, caring, equal, and just global society – if for any other reason than sheer survival.

Our task in this moment is twofold: we have to urgently prevent social and economic collapse and build a new world at the same time. If we trust scientists, on climate and coronavirus, both of those are equally important.

What we do now will not only alter the course of this pandemic; it will also shape large parts of our collective futures. Restoring the status quo shouldn’t be our goal. Decarbonising the economy and strengthening social safety nets is the best way to ensure a more stable and prosperous society going forward.

The hardest truth is realising that this crisis is going to get a lot worse before it gets better. Among friends, I’m referring to this as the Jurassic Park problem. In the movie, one of the main characters tries to switch off the power to an amusement park filled with dinosaurs, Watch a clip of the scene from Jurassic Park (1993). a system that was never meant to be powered down. When they switch it back on, chaos ensues, the dinosaurs escape, and we realise that when fragile systems break, they can break quickly.

With a quarter of the world under lockdown, we are foolish to think we can bring our entire economy back online as it was with no problems. We have to create a new system.

Governments have already pledged trillions of dollars in emergency funding to battle the coronavirus pandemic, and those plans are quickly becoming reality. In India, currently home to the largest and strictest lockdown in the world, leaders have announced a $22bn rescue plan, which amounts to less than $20 for each of its 1.3 billion citizens. In the US, a $2tn stimulus package has been approved, including billions for companies like Boeing, one of the world’s largest defence contractors, which has spent years funnelling taxpayer money to prop up its own share price. Almost immediately afterwards, US lawmakers have gotten to work on plans to free up an additional $2tn of infrastructure spending.

In the EU, Germany has declared emergency powers to lift its national debt limit to fund a bailout for corporations. The tourism-dependent Caribbean has spent decades cultivating an economy catering to the whims of rich travelers. The cruise line industry is asking for bailout money, but how much of that will make its way to workers in the Bahamas or Jamaica? Italy and Spain have so far seen the worst of the pandemic and are also highly dependent on tourism revenue. With global air travel all but shut down, it’s an open question how their economies will fare. If either country collapses, it could send a cascade of financial pain throughout the world.

For the most part, all this money isn’t just a stimulus or a bailout – it’s life support for the status quo.

Three steps to recover from this crisis

Ending the Covid-19 pandemic isn’t just about saving lives and getting back to normal. It’s about rebuilding our social safety nets. Read my colleague Nesrine Malik’s essay on the parallels between the coronavirus crisis and the 2008 financial crisis. Ending the climate emergency is not just about reducing emissions. It’s about treating each other better. Read my essay, ‘Climate change is about how we treat each other’.

In the US, the pandemic has refocused the conversation on what kind of social safety nets our current system has been missing, and what kind of system we might be able to build to replace the (failed) privatised-capitalist one that treats workers as machines. Thinking of healthcare, housing, jobs, and a stable environment as universal rights – and the main organising principles of society, instead of profit-making – is a much more stable way of building an economy.

We cannot be satisfied with coronavirus recovery plans that only allow us to survive. We must also demand plans that will help us thrive. We must be forward-thinking, not reactionary.

Here are three important steps we could take to inject long-term thinking into our short-term crisis recovery:

The collapse in oil prices has created a remarkable opportunity to end the climate emergency. The fossil fuel industry has spent decades sabotaging the planet’s life support system and building a fragile global economic system that’s now at risk of collapse. Governments should purchase majority shares in the largest-polluting industries, Read climate journalist Kate Aronoff’s proposal for nationalising the fossil fuel industry. such as oil companies, airlines, and cruise lines, and repurpose them for a zero-carbon future. As a majority shareholder, we – the taxpayers who would own these companies – could force them to become non-profit entities and rapidly advance their progress investing in renewable energy, electric airplanes, passenger rail, and other forms of low-carbon travel.

Even while fending off coronavirus, Italy has already nationalised their major airline, Alitalia. With oil prices plunging, a controlling stake in the world’s five largest oil companies – Shell, BP, ExxonMobil, Chevron, and Total – could be purchased for about $400bn right now, compared to about twice that at the start of 2020. If that happened, we could wind down their operations in line with science-based climate targets and justice for their workers.

Public works projects on an enormous scope and scale

Dollar-for-dollar, investment in large building projects is one of the best stimulus payoffs, but we need to cast a wide net and make sure everyone has a chance to participate in the new economy. With long-term interest rates less than 1% right now (or even negative in some countries), there’s virtually an unlimited amount of money available for public works projects that could help create the carbon-free economy we all need.

A group of academics has outlined dozens of ideas for how this money could be spent, including retrofitting every building, no-interest loans for cities to build new sewer systems, and funding farmers to practise regenerative agriculture. The ideas have already been endorsed by hundreds of experts and have broad public support in the US.  The main idea in their proposals is that this new infrastructure money absolutely must not be spent on building roads and airports that will reinforce the failed fossil fuel economy, but instead on building the kind of infrastructure that will power the world for the rest of the century.

And with unemployment rates surging, this is a perfect time to put people to work in large-scale infrastructure projects. Investing in a green stimulus plan would be a source of millions of new jobs over the next decade, for less than half of the cost of this week’s US bailout plan.

Last year, it was unthinkable that the US would institute a universal basic income anytime soon. Now, it’s on the verge of becoming a reality.

After Andrew Yang, a presidential contender, brought the idea into the mainstream in the US, many politicians, including Donald Trump, have been considering the idea.

The next step will be declaring other necessities such as healthcare, housing, and jobs as a human right. These are core parts of the Green New Deal framework for climate policy, and the coronavirus crisis has proven they’re not out of reach in the near term.

The establishment of a society that cares about supporting life instead of economic growth Read Jason Hickel’s essay, ‘Outgrowing growth’. will be the key to solving this crisis the right way. The Great Depression led to the New Deal. If we do this right, we’ll create a world that’s more resilient to future disasters because we have distributed and decentralised our power supply and tackled the climate emergency. Read my speculative preview of the 2020s.

Reluctance to these ideas only exists because they threaten the power of the status quo. But in the past few days, we’ve shut down a huge portion of society out of solidarity for each other to save each other’s lives. What more good are we capable of? 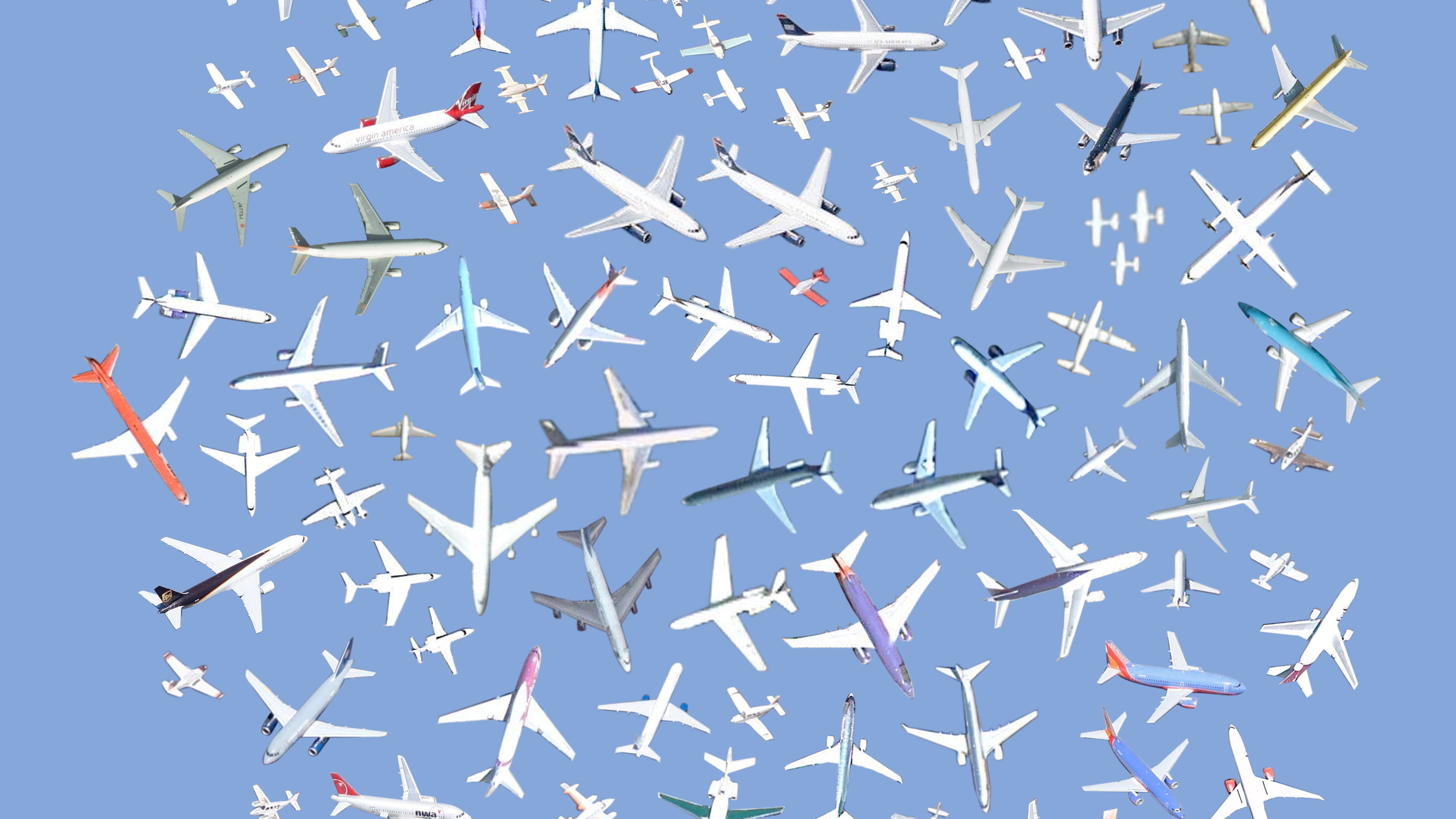 About the images Projects by artist Jenny Odell always seem to be extensive – you might even say obsessive. Like The Bureau of Suspended Objects, for which she made a searchable online archive of 200 objects salvaged from the San Francisco dump, each with photographs and painstaking research into its material, corporate, and manufacturing histories.

The images with this article, from the series Satellite Collections, are collections of cutouts from Google Satellite View – like parking lots, silos, landfills, waste ponds. They almost look like hieroglyphs. Seen from above, these structures clearly state: people were here. (Lise Straatsma, image editor) See more work by Jenny Odell 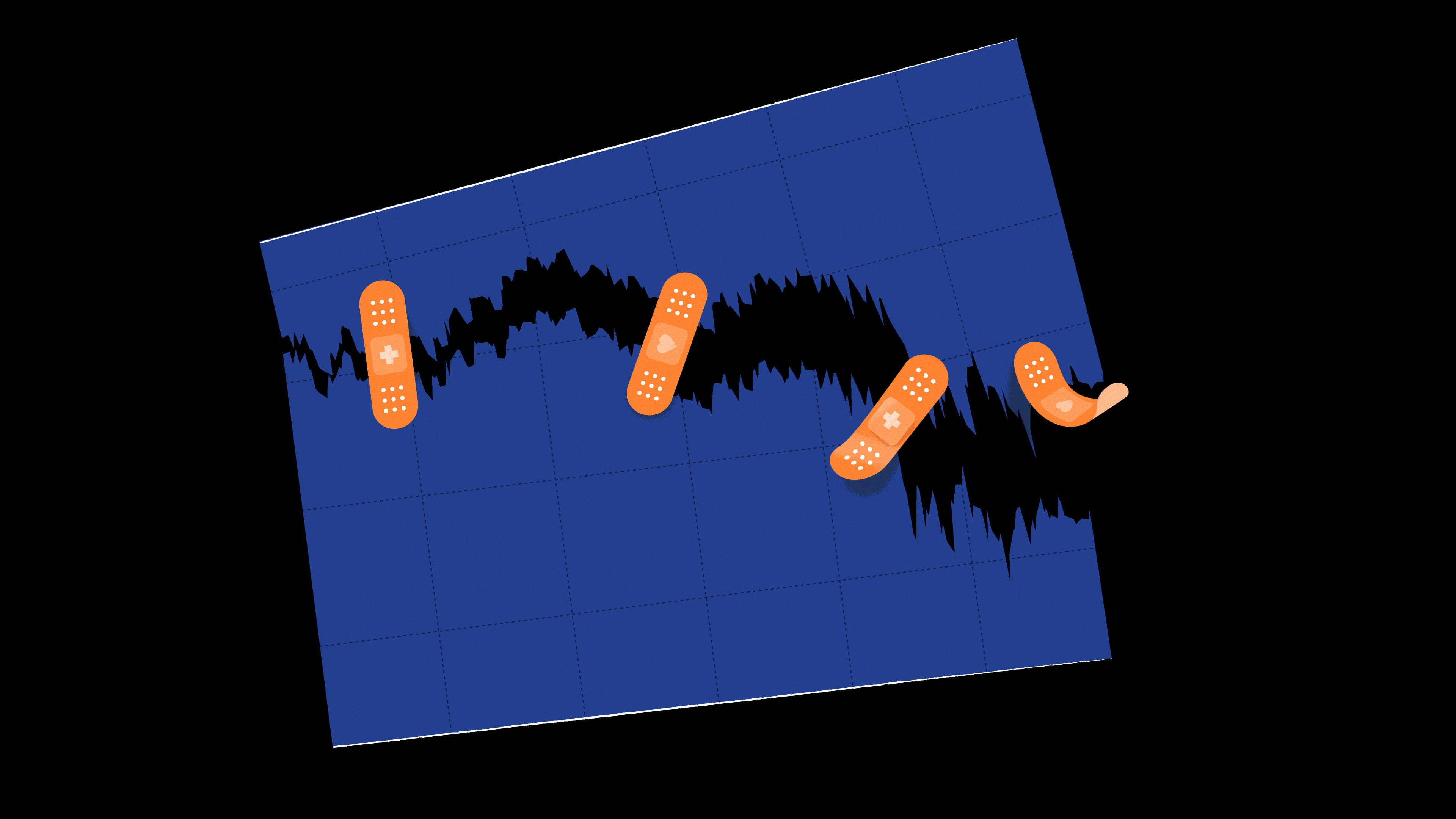