Illustrations by Ivo van de Grift (for The Correspondent)

Is buying something online worse for the planet than going to a brick-and-mortar store? It’s a question that was posed several times in the contributions under an article I wrote about the growth of online shopping and its possible downsides.

No, wrote one member, because "where people used to drive their car to the store to buy one thing, there’s now one driver transporting a hundred packages and either dropping them off at a pick-up point or delivering them to people’s homes".

To which someone else replied: "I feel like online shopping kind of gets a bad rap, especially since ‘custom’ shopping is a lot more efficient than ‘traditional’ shopping."

That feeling doesn’t seem unjustified. If you Google the question, you’re quickly presented with articles Like this one in Nature claiming that online shopping is more sustainable than you think.

But if you dig a little deeper, you’ll find articles Like this one from Yahoo and studies that claim the opposite and tell you that online shopping is less environmentally friendly.

To make better sense of this, I spoke to Heleen Buldeo Rai, whose PhD research was on the ecological impact of omnichannel retail. According to her, that’s because the outcome of a lot of studies depends heavily on the context. And there are also plenty of assumptions and omissions in those studies – including her own.

Your own research shows that online shopping is more environmentally friendly than going to the store. Is that true?

That’s partly true. The literature I initially based my research on often showed that online shopping was better for the environment than in-person shopping. My research confirmed that, but with the nuance that the sustainability benefit swiftly declines with certain consumer behaviour – for example, if someone has a package shipped to a pick-up point and picks it up by car.

How can one study find that online shopping is better for the planet, while another finds the exact opposite?

Research is always done in a specific context. For example, in my research, I focused on shoe sales at a specific retailer who used a certain transport service over a fixed period of time and in a specific country or area: Flanders. Those are all variables that can impact the final outcome.

The same goes for questions like: are people having their orders shipped to their homes or to a pick-up point? And if it’s the latter, are they going to pick it up by car, by bike or on foot? And if people do their shopping in the city, are they going by car or taking public transport? And are they going for just a single product or are they shopping for multiple items at once? Or are they perhaps picking things up on the way home from work? That’s what makes it so difficult to make generic statements about what’s better, online or offline shopping. It all depends on what you’re looking at, what assumptions you’re making and what you do or don’t take into account.

A lot of studies strictly separate consumers who shop online and offline. But in practice, not only do companies sell both on and offline [which is called omnichannel], consumers also use both channels interchangeably. For example, you might buy the boots you tried on in the store from Zalando because they’re a little cheaper. Or maybe you look online for information about a product first, but then buy it in the store.

Something that really stood out to me is that all of these studies, including yours, focus on what’s called the last mile. It’s the last leg a package travels before it’s delivered to someone’s home. Why is that?

The assumption is that no matter where your purchase comes from – whether it’s a Chinese factory or a studio in Europe – most of the pollution (and cost) is in the last few miles, so from the store or warehouse to your home. That’s because the logistics process prior to that last mile is extremely efficient, products are shipped in bulk. Another reason is that the last-mile approach makes it easier to compare with brick-and-mortar stores. Then you can compare the offline purchase journey to the impact of the last mile of your package.

Having said that, I now believe that you should also look at the section before that last mile. Because not every package you order in Belgium or the Netherlands actually comes from a distribution centre in your area or country. It might be coming from the other side of the world, especially with the growth of online retailers like Amazon and AliExpress. Those packages are sent individually, mostly by plane, which has a significant influence on the overall environmental impact.

A comment you make about a lot of studies – including your own – is that they don’t take a "holistic view". What do you mean by that?

Let’s say that online retailers allow people to make purchases in a more efficient, sustainable way that takes less time. The question then becomes what’s going to replace all that saved time. Do those trips by car to the grocery store make room for trips for other purposes? To what extent does e-commerce change our mobility behaviour in general: where we live, what we buy, how much we buy? We know very little about that, which makes sense. It’s a completely new subject.

And research has also shown that people who shop online don’t necessarily go to brick-and-mortar stores less often. They’ll often buy specific things online that aren’t readily available nearby. That’s in addition to their in-person purchases. So to what extent does e-commerce fragment our buying behaviour?

I’m happy with my study, but it’s still limited; it’s about 700 customers, focused on a specific product, a specific region, a specific retailer. As researchers, it’s a real challenge to cover the tremendous variety that exists. The rapid developments in this area don’t make it any easier. What’s relevant today may need some caveats in two years’ time.

Why is it important to know what’s better for the planet? Personally, I think that whatever the outcome, we’ll keep shopping online.

There’s a lot of turmoil around e-commerce – about the massive power held by big players like Amazon, about empty shopping centres and what that does to cities, about air pollution and noise pollution from delivery vans in inner cities. There are countless stakeholders – national and local governments, transport companies, retailers, the list goes on. And everyone has their own truth.

It’s a constant focus area for policymakers, but to come up with good plans, you have to be well informed. For example, there are now calls for a tax on all online purchases, or for customers to be required to pay for returns, or for a CO2 tax to be introduced. But those plans have to be based on something. That’s why research on things like environmental impact is extremely important. But at the same time, we have to be careful about generalising the results.

Can you give a concrete example of measures that aren’t based on reality?

Take delivery vans. Cities and towns are becoming obsessed by all the delivery vans driving around because they’re usually high-pollution diesel vehicles. That’s not necessarily unwarranted, but those vehicles are then immediately linked to the growth in online shopping, while the majority of them are actually used to stock brick-and-mortar stores, or for construction, painting or other businesses.

If you want to introduce a CO2 tax to offset their emissions, I think you should do it for the entire transport sector. And you certainly shouldn’t continue subsidising company cars on a grand scale with favourable tax structures, which is currently the case in Belgium.

What’s the most important insight you gained during your PhD research?

I think the fact that there is an incredible amount of low-hanging fruit that can help and encourage consumers to make more environmentally friendly choices. Just take the choice between a delivery time of one day or several days. The faster the delivery time, the greater the impact on the environment, because it’s difficult to bundle packages and delivery routes aren’t as efficient. And don’t forget the pressure it puts on people who work as order pickers in distribution centres.

People don’t necessarily need their order tomorrow or the same day, especially if you tell them that waiting a little longer is a more sustainable option. Not that it’s going to change the world, but it’s easy to do. Unfortunately, online retailers aren’t yet having that conversation with their customers.

I think they’re afraid of losing customers. Competition online is huge. Once customers are on the check-out screen, as a seller, you’ve already overcome a lot of hurdles. As a store, you don’t want that customer to still end up clicking away.

Do you think this focus on speed is getting worse?

Initially, it was Amazon creating the pressure on delivery time in e-commerce, because they were trying to compete with brick-and-mortar stores, where people can get instant gratification. Read more about this phenomenon here, from Business Insider In other words, they buy something and are immediately rewarded, because they can take it straight home. Other online retailers followed suit, which was almost inevitable.

On the other hand, it’s the logistics players they partner with, like UPS and DHL, who are also increasingly focused on delivering as quickly as possible. If you give consumers the opportunity to influence their deliveries themselves, those shipping companies will have to rearrange their logistics processes. And yet these companies do still say that they are better able to manage their business if they’re given more time. I think now is the time to address it. At the moment, consumers don’t seem to expect everything to be on their doorstep in the blink of an eye.

Do you see the shift from in-store to online shopping as an overall positive development?

Yes, absolutely. Speaking as a consumer, I’m very happy with it. I also see that, with the rise of omnichannel retail, we won’t have to move to a world where we no longer have any actual stores. The danger, however, is that soon there will only be a handful of large retailers left. That’s why I would certainly encourage you to buy from local stores if possible. Here in Paris, where I live, we’re seeing online initiatives to buy products from local business owners, as well. As city dwellers, we value these kinds of business owners, but as consumers, we often make different choices.

Translated from the Dutch by Colby Dunn. 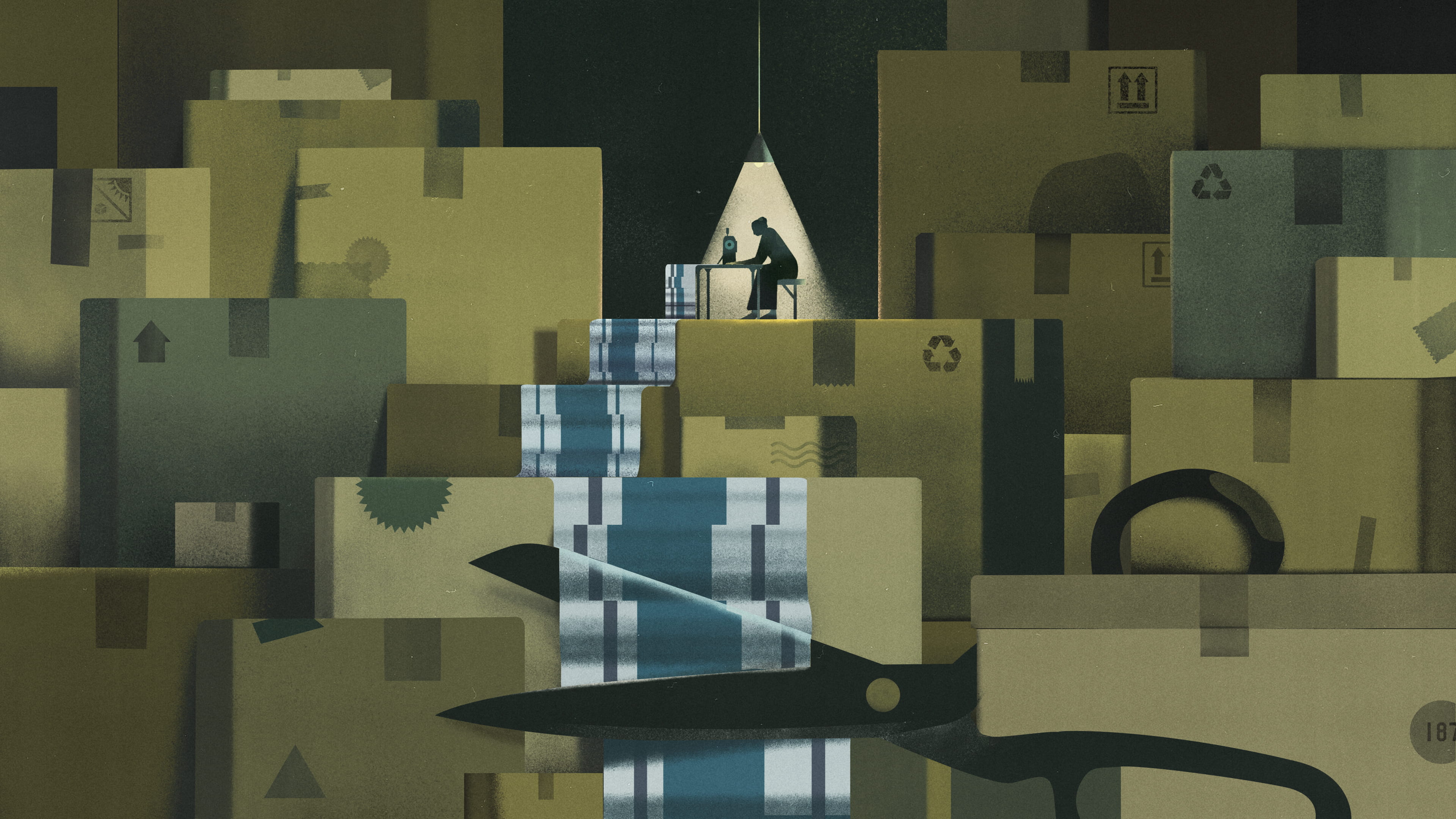 Fast fashion, slow destruction: this is the price other people pay for the cheap clothes we buy For years, C&A and other large clothing companies contributed to the erosion of the garment industry in Bangladesh. When trade suddenly came to a standstill as a result of Covid-19 and companies were forced to cancel orders, it immediately became clear what this continuous demand for cheap and fast production had led to. Read my article here