I moved house two years ago. My new studio turned out not to have an internet connection. The first provider I tried referred me to a second one, which told me that I could only be helped by a third one. When I contacted that one and only option, they told me that they were willing to hook me up, but it was going to cost me more than €40 a month.

By the time Christmas came around, I still wasn’t online. My initial sense of “first world frustration” – how difficult could it possibly be? – gradually gave way to a different emotion: a feeling of freedom. The temptations of Netflix, the constant deluge of online news, the ease of working at home – all of that was simply no longer possible.

Suddenly, what I did when I was at home was all up to me.

“It’s not about usability, it’s about autonomy,” computer scientist and author Cal Newport wrote in his 2019 book Digital Minimalism: Choosing a Focused Life in a Noisy World. Smartphones, social media and other digital media can distract you from doing what you really care about.

I hardly read books any more, instead preferring to lay docile on the couch for hours watching Jane the Virgin. At the end of the evening, I would feel empty and guilt-ridden. I had just been planning to watch one episode during dinner, but Netflix had – for the umpteenth time – seductively beckoned me deeper and deeper into the show’s current season.

This is what Newport meant when he wrote “it’s about autonomy”. Anyone you ask can list various advantages of having access to technology. You can watch fantastic films and series on Netflix. On Facebook, you can keep in touch with childhood friends. And Twitter gives you a feed of interesting news that you might otherwise have overlooked.

But the costs often outweigh the benefits. You just wanted to take a peek at your cousin’s newborn baby, and now you’ve been scrolling through your Facebook feed for an hour. You glanced at Twitter for just a second, and a comment from a nasty troll made your stress levels shoot through the roof. You’re bingeing Friends on TV but losing touch with your actual friends.

It was embarrassing, I felt. I was disciplined enough to write a book, but choosing for myself what I did in my free time? Impossible. I was underestimating the sophisticated strategies used by platforms like Netflix and Facebook. These companies go to great lengths to lure you in. The more that they can grab your attention, the more money they can earn.

That’s why likes and retweets keep you coming back to check if you have received even more recognition and appreciation, and why Netflix sometimes starts playing the next episode in the series after just five seconds. No wonder the company’s director referred to sleep as their biggest competitor.

It has almost become its own genre of journalism: the self-help articles on how to cure that pesky smartphone addiction. My fellow correspondent Rutger Bregman gave it a go, and a New York Times article Read the article here on smartphones went viral last year. Pieces like these offer practical tips: do a digital detox, switch off your notifications or – in Rutger’s case – let your spouse dictate which apps you’re allowed to install.

But tricks like these, Newport believes, are only treating the symptoms, not curing the disease. The real problem is that we don’t have a clear grasp on why we use some forms of technology. We jam app after app onto our overstuffed phones and then let the tech decide what’s important.

Why don’t we decide first what we think is important and then figure out which resources will be most helpful in making that happen? Why don’t we have, as Newport puts it, a “philosophy of technology use”?

There are all sorts of philosophies when it comes to how we use technology in our own day-to-day lives. Newport describes two extremes: “the Neo-Luddites, who advocate the abandonment of most new technologies … and the Quantified Self enthusiasts, who carefully integrate digital devices into all aspects of their life with the goal of optimising their existence”. But neither end of that spectrum is Newport’s preferred alternative.

Instead, Newport proposes a different approach: digital minimalism, which he defines as “a philosophy of technology use in which you focus your online time on a small number of carefully selected and optimised activities that strongly support things you value, and then happily miss out on everything else”.

In other words: decide what’s important to you, identify what you need for that and ignore the rest.

Take Tyler, who had become compulsive about checking his social media. He used Facebook and similar platforms “to help his career, to keep him connected, and to provide entertainment”. But re-evaluating how he used social networks brought him to an important realisation: it was hardly the best possible way for him to pursue those three purposes.

So, he went cold turkey and ditched social media altogether. When Newport spoke to him a year later, he described Tyler’s excitement over how his life had changed. He was reading three to four books a month, volunteering in his local community and – no less – had started learning to play the ukulele. And the most important part: he was spending more time with his wife and children.

Tyler also saw a major improvement in his professional life. “Some of my work clients have noticed a change in me,” he told Newport. “When I tell them I quit social media, their response is, ‘I wish I could do that, but I just can’t’. The reality, however, is that they literally have no good reason to be on social media!”

The point is that to use digital tools where they actually make a difference, and nowhere else

Sure, Tyler is a bit sentimental, but he is a great example of what Newport means by digital minimalism. He decided what was important to him, realised that his current behaviour wasn’t contributing to that as much as he wanted and then found a better way to build his career, stay in touch with his loved ones and entertain himself.

That doesn’t mean you should just toss all your tech right out the window. The whole point here is to use digital tools where they actually make a difference – and nowhere else.

Michal stopped obsessively reading online media, instead subscribing to a couple email newsletters and a few blogs that she checks “less than once a week”. By restricting the flood of digital information to a carefully curated trickle, she could still find the inspiration she craved without getting sucked into the non-stop news cycles.

And Gabriella adored Netflix, but binge-watching was making her miserable – so she decided that she wouldn’t watch Netflix alone any more. “Now [streaming shows is] a social activity instead of an isolating activity,” she told Newport.

Like Newport’s earlier book, Read more about Deep Work here Deep Work, Digital Minimalism is an easy and enjoyable read – although he does tend to slip into an academic style of writing here and there. It definitely belongs in the category of self-help books, like The Subtle Art of Not Giving a F*ck and Quiet, that manage to convince you that you might actually be able to change your life.

The book is bulging with practical advice. For example, Newport asserts that it’s not possible to become a digital minimalist by taking baby steps. Lots of the technology we use is too addictive and convenient to relinquish easily. But he has a solution: “digital decluttering”.

Here’s how it works:

Without realising it, I had done a low-key declutter of my own. Even before that, I had deleted lots of apps from my phone and switched off my notifications. And now, without internet access in my own home, I discovered that my time was no longer defined for me. Suddenly, I was able to free up enough time to do the things that are important to me. Like reading, exercising and watching great movies.

So I cancelled Netflix, picked up a newspaper subscription, bought an unlimited cinema pass and dusted off my running shoes. Even though I still had internet access on my phone, I was now limited to a few gigabytes. I tuned into the latest episode of my favourite TV show once a week, but bingeing a whole series simply wasn’t an option anymore.

I also installed a DVD player and relocated the DVDs collected by my mother and brother to my own bookshelves: The Sopranos, Midsomer Murders, Mad Men. “2007 texted you,” my boyfriend said. “They want their series back.”

I recently moved house again. Ever since the pandemic started, I had used my boyfriend’s internet connection to be able to work. Now I have my own connection again. As it turns out, you shouldn’t exaggerate your digital minimalism. And that’s autonomy too.

This article first appeared on De Correspondent. It was translated from the Dutch by Joy Phillips. 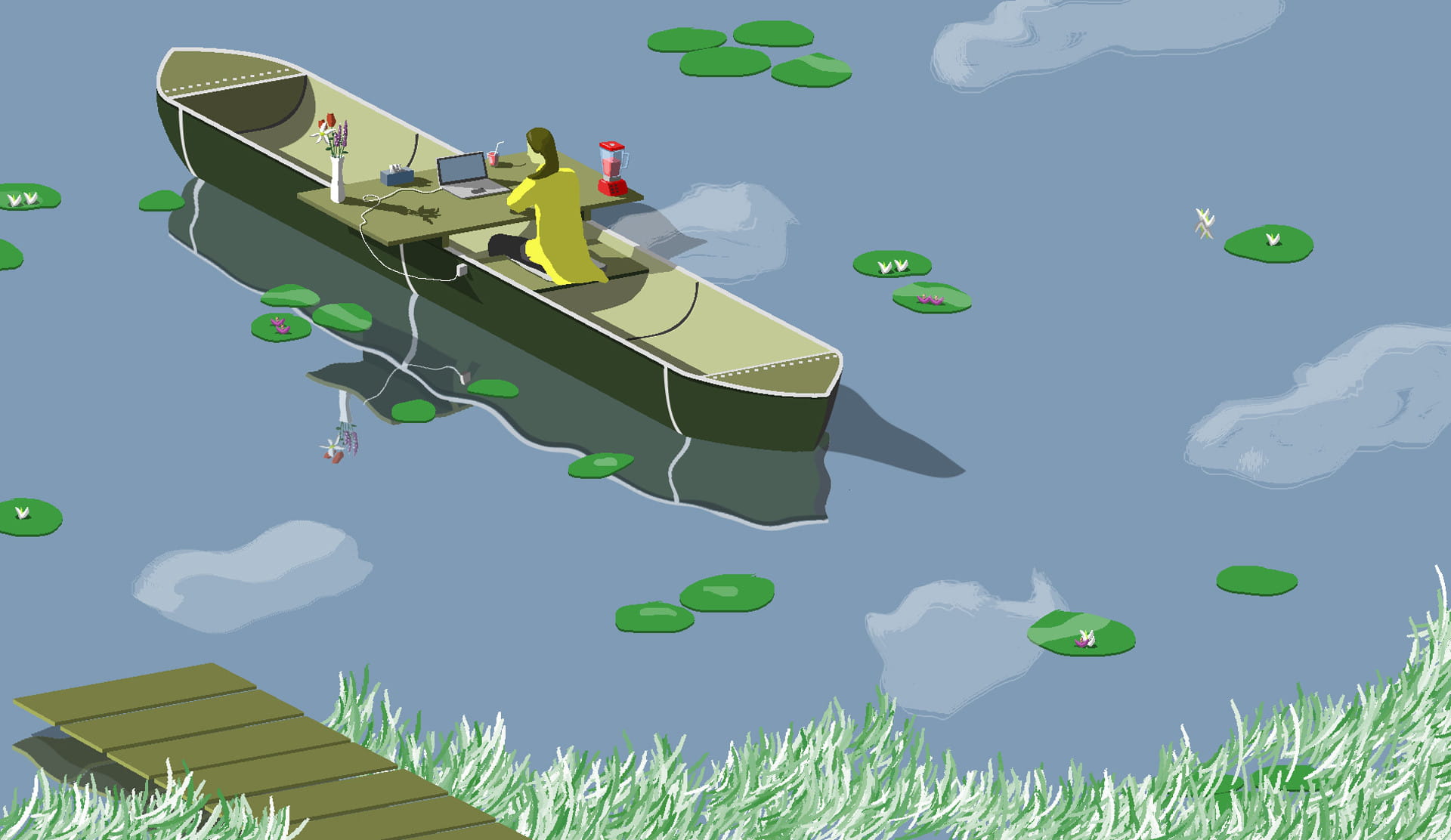 First, eat the live frog (and two other good habits to start your day) In a world of multiple pressures and distractions, it always seems like there is too much to do and too little time to do it in. Here’s a handy reminder to slow down, select what’s important to you, and above all, get started! Read Ernst-Jan Pfauth’s article here