Housing is a basic human right, but one which is very difficult to claim.

More than 200 million people are homeless. And at least one in six people around the world do not have access to adequate housing. These are staggering figures. The pandemic did not spare our living spaces, and evictions became an increasingly lived reality across the world.

If housing is a basic human right, how can we ensure houses are provided for everyone?

On 28 August, we invited housing rights experts, urban planners, architects and activists from five countries to discuss how the spaces we inhabit are changing – and more importantly, about how they should change.

As a journalist working on land rights, I have pulled out some strands that take us to the core of the problem – and perhaps even bring us some possible solutions.

The right to housing

As human beings each of us are entitled to certain basic rights. Housing is one of them.  According to the Universal Declaration of Human Rights

However, governments across the world do not treat housing as a “right” but as a “benefit” to be accorded when possible or when necessary. A right is considered to be inherent and can be claimed by individuals from relevant authorities. When we begin to believe that each person is entitled to a house, we will not see housing for all as a “burden on the taxpayer”, freeloading or benevolence by the powerful. Importantly, it provides redressal mechanisms to the aggrieved individuals.

Enforcing housing as an individual’s right becomes a problem in a capitalist economy.

In most parts of the world, the quality of shelter depends on the economic status of the person. The richest 1% of the world’s population own 44% of the world’s wealth. Unequal distribution of wealth and resources ensures that those at the bottom of the pyramid struggle for essentials.

Unchecked profiteering is a key hindrance. This is mainly because the majority of the world’s real estate assets, approximately US$263tn, is driven mainly by private equity. Residential real estate stands at about $160tn. Read more of Leilani Farha’s contributions here “Neoliberal policies which assumed that the market would meet any demands out there have been failing for a while. Governments do not have the capacities nor the funds to meet all unmet demand,” says Mukta Naik, an urban planner from India.

A market economy recognises the right of the wealthy to own multiple homes, and social housing for the disadvantaged becomes a charitable venture.

There are very few exceptions that have turned this model on its head.

Countries with better socio-economic conditions, such as Finland, have recognised that housing people in liveable conditions reduces their exposure to debts, alcohol and drug abuse. Many other countries find this counterintuitive. They require homeless people to be clean from drug addictions, for instance, before they are eligible for social housing.

Finland has decided to unconditionally allot homes to homeless people. “What I like about the approach,” says Leilani Farha, former UN Special Rapporteur for housing rights, “is that it recognises that housing is a human right”.

The core idea is that housing rights form the basis on which to set other aspects of their lives right. It’s in stark contrast to the term “housing markets” – which implies that housing is a commodity to be sold. For example, if your government ensures you are not living on the streets, you can hope to get a job. A house might ensure people get jobs, it might push them up the socio-economic ladder, which in turn opens up avenues for overcoming drug addiction, for instance.

Using this approach, Finland is set to end homelessness by 2027.

Can the Finnish model be replicated in populous countries of South Asia or Africa? Perhaps not. In countries with poorer socio-economic indices, governments struggle with limited resources.

Repurpose buildings and move away from ‘benefits’

Theresa Williamson, a city planner and executive director of NGO Catalytic Communities, works extensively on Brazil’s favelas, and says there aren’t enough market incentives for low-income housing. Public sector-provided housing is grossly inadequate in quality and quantity. “Favela communities, which are now in their fifth (or more) generations in many places, as they consolidate, become de facto solutions,” she says.

‘Favela communities, which are now in their fifth (or more) generations in many places, become de facto solutions’

Who should live in what type of house is determined by socio-economic appearances – the way they look, dress, how they behave. Why can’t an empty condo work as a home for a homeless person? As weird as it sounds, many governments believe that people should “learn how to live in a house”, and are not “house ready”. “Of course, this is a discriminatory perception and really quite repugnant,” says Farha.

So they have to use low-cost houses that governments provide.

If governments can build low-cost houses and accommodate a maximum number of people, they would have done their job. But land is a limited resource – societal and economic hierarchies dictate who gets what share of it.

“Currently, low-income groups have no affordable housing options in many parts of the world, and thus are forced to live in grossly inadequate conditions in a state of deep insecurity,” says Shivani Chaudhry, of Housing and Land Rights Network in New Delhi, which has worked on evictions in New Delhi during the pandemic. “Investing in social housing could solve this.”

Take South Africa, which has an “incredible” social housing policy – but a blurry amount of application and investment. “Absence of investment without intention of profiteering ... have proven to be mere repetitions of apartheid townships creating the illusion of access to housing,” says Adheema Davis, a Durban-based architect.

Evictions have been a universal story of the pandemic: only policies can fight them

The worst effect of a tanking economy on housing rights is evictions. Why are there reports of mass evictions from all corners of the world, when there still are many vacant houses?

But about 1.77 million people are homeless in the country.

And about 14,000 people were evicted across many cities between March and June this year, at the peak of the lockdown.

This means that Indians are building homes for those who have purchasing power and the capacity to earn more, keeping the houses empty while the low-income groups go homeless. The national urban housing shortage is about 19 million houses, of which 95% is for low-income groups. So the pandemic has just compounded the struggle for housing for the majority.

The situation in the US is no different. The country was in the midst of a severe affordable housing crisis with a shortage of seven million affordable homes for the lowest income renters. “Another way of saying that same number: for every 10 of the lowest income renters, there were fewer than four affordable apartments available to them,” says Diane Yentel, the president of US-based National Low Income Housing Coalition.

At the Covid-19 Eviction Defense Project, Marco Dorado has been working towards providing free legal aid to tenants facing eviction in the state of Colorado. He says nearly 30-40 million Americans face eviction risk due to Covid-19-related financial hardship.

“Like the pandemic, Covid-19-related evictions and eviction risk will disproportionately impact historically marginalised communities such as black and Latinx Americans,” he adds.

India and the US are among the most unequal countries in the world.

While western media has focused on pandemic-related evictions across the US, South Africa’s Jhono Bennett draws attention to evictions in his country. “Now that the lockdown is loosening up,” says the urban planning researcher. "It appears trans-scalar governmental forces are about to deploy mass-evictions across Johannesburg for no apparent reason other than an aggressive display of force to remind those living in ‘informality’ who is in charge.”

Finally: find out who owns your home

If we agree that our goal is to provide housing for all seven billion people living on earth, then the first step towards achieving that is to conduct “housing audits” and “land audits”. This simply means we map out our communities and figure out who owns our homes and our lands.

An audit is one solution. “We need ‘land audits’ to understand how land is owned and how land use is determined, controlled, and modified to suit real estate players that often have close nexus with politicians,” says Chaudhry. “Unless the political and financial dimensions of land are addressed, the housing crisis cannot be solved.”

Once we find out who actually owns our homes, we might be able to zero in on the one universal problem. “Unaffordability is a consistent problem across the world including in Latin America and South Asia,” says Farha, explaining that while Berliners have been protesting rapid rent increases, this issue is also commonly experienced in countries of the global south.

Since the 1990s, markets across the world see a certain level of uniformity when it comes to the nature of capitalism. The commodification and growing financialisation of housing and land is depriving millions of this basic human right. Access to justice for violation of housing rights is also limited in most countries.

Adequate housing, like nutritious food, is a human right. It might need a tectonic shift in our current economic system to achieve that. 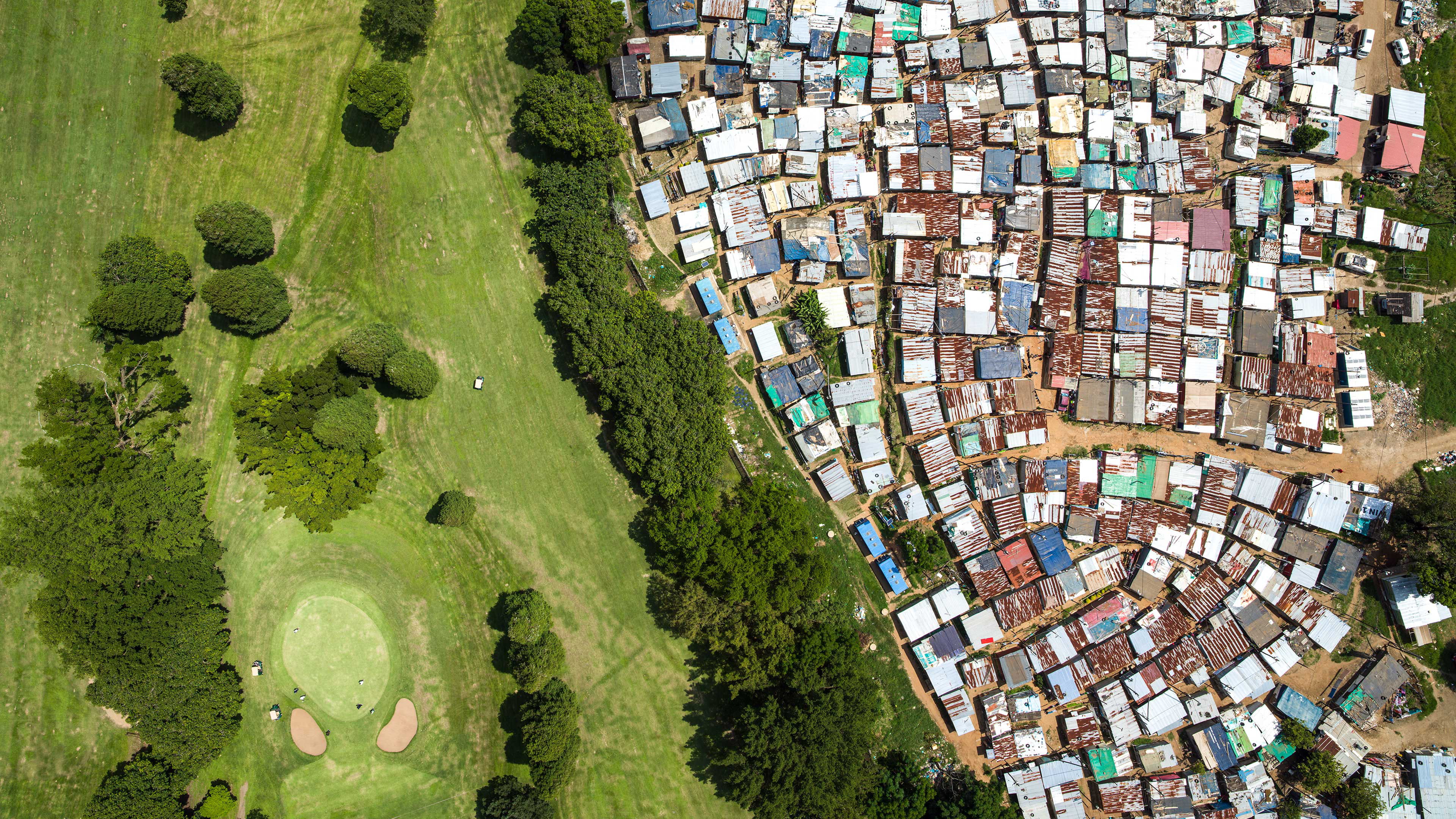 Why climate change is a civil rights battle Climate disasters are not ‘natural’ – they’re human made. If we want to fight climate change, we first need to tackle inequality and racism. Read more here >