Necrophilia? Upload poses interesting questions about our ability to love the 'dead' - not just emotionally but physically. All images are from the series Upload, by Prime video.

Upload is the kind of series about dying that dead people deserve. It’s the antidote to every zombie movie, one that leaves you wondering why the dead are always shown as filthy, flesh-eating creeps when what they must really crave are hot showers, proper food and sex.

In Upload, people about to die upload their memories and consciousness to “heaven”. They pay for this service so they can enjoy eternal afterlife, courtesy of artificial intelligence and virtual reality. Heaven’s infrastructure is owned and managed by a telecom company (“Horizen”), which determines your status according to your data plan.

Lakeview, a posh version of heaven where the story unfolds, offers grand Victorian-style lodgings, golf courses, and lavish buffets. You get an avatar that resembles your mortal form, 24-hour customer support managers called “angels”, therapists to help you cope with your new milieu, even sex with your still-alive partner on Earth, powered by “VR suits that let you change your avatar, boost levels, and get stimulation you wouldn’t believe”.

Want more? Just choose from a wide range of in-app purchases – like designer suits to wear at your own funeral.

The equivalent of hell in this world is a zone inhabited by “2 gigs” – data-poor souls who are confined to sparse rooms which resemble jail cells or the drab socialist architecture of the Eastern Bloc. They get shitty food, incomplete books (“only the free preview”) by way of entertainment, and are “frozen” – a kind of second death – whenever they run out of their meagre 2GB quota of data.

The hero of the show is Nathan, a young coder who is uploaded to Lakeview after his self-driving car crashes. The story includes some predictable and corny bits – a love triangle featuring Nathan, his rich girlfriend Ingrid who pays for his upload, and his “angel” Nora; sideswipes at Silicon Valley’s obsession with futuristic tech; and mystery around Nathan’s death.

What made me sit through all 10 episodes is the show’s use of frothy sci-fi tropes to comment on inequality – a defining feature of the human condition that doesn’t leave us even after death. Most of all, and the reason I chose to review the series, Upload stands as a worthy addition to the crowded “afterlife comedy” genre The ‘afterlife’ trope isn’t new on TV. See this Rolling Stone article for a detailed review of Upload and comparison with similar shows. because it exhumes a theme that we don’t generally consider while discussing the ways in which inequality manifests all around us.

This show argues that the difference between the haves and the have-nots (or the living and the dead) ultimately comes down to their relationship with sensory stimulation.

Privilege, it tells you, is nothing but access to touch, taste and orgasms.

Metaphors related to the body and bodily sensations loom large in Upload. After Nathan’s avatar boots up in heaven, pixels from his memory file join together to form his virtual body. Nora explains that she is configuring his "nerve endings" using a software programme that he experiences as "pins and needles" on his skin. At first, Nathan is sad and disoriented in heaven. Then he goes for a shower: "Oh my God, this is fantastic. Yes, water pressure!" he moans.

Meanwhile on Earth, Nora returns to her small rented home where the "water is almost warm". A friend tells her: "Lucky you. I haven’t had hot water in a week".

As Lakeview’s software awaits an update, seasoned residents are giddy with anticipation.

“Is it that big a deal?” Nathan asks.

“Fuck yeah!” responds another upload. “For one, they’re adding bitter, citrus and umami to our tongues. You didn’t notice that we only have sweet and salty now?”

“That’s why everything tastes like kettle corn!” Nathan exclaims.

In contrast, back on Earth real food is a luxury. Ordinary people can afford only 3D-printed food, even as giant food corporations are now part of massive tech conglomerates, with names like “Nokia Taco Bell’s” and “Oscar Meyer Intel”.

As Nathan attends his funeral, interacting with Earthling guests from behind a transparent screen, one of them tells him: “Remember I used to pull a quarter from your ear? I can’t do that now, because you’re in a video game.”

For a while, Nathan’s new digital body supplies enough thrills to keep him engrossed in this game. He discovers that his pee is now a magical, bendy thing that he can manoeuvre and aim at will. Over a video call with Ingrid, he reports that he feels “completely real and alive”. And, he gushes again: “The water pressure is incredible!”

The complications begin with sex.

Initially, Ingrid is grossed out at the prospect of renting a reusable VR sex suit (advertised as “the hug suit”) lined with eerie contraptions that look like fingers made of rubber. But after an awkward interview with Vogue, where she and Nathan are quizzed about their sex life (“we were just…we were waiting for the new suit,” she fumbles), Ingrid decides to give in. During foreplay, the couple marvel at the extra warmth and softness of each other’s skin.

But soon, they run into a glitch – Nathan can’t get an erection. “Help!” Ingrid yells. “There’s some sort of tech issue happening with Nathan’s dick.”

Upload deploys penis-as-metaphor to take a jab at inequality. During a visit to see the 2 gigs, Nathan notices a man walking around naked and without a penis. “Must be the end of his month,” Nora explains piteously, while the man proceeds to fashion a penis from an empty box of cereals.

Touch connects, but it also divides

Upload doesn’t take its own commentary too seriously. But its portrayal of our bodies as the site of bitter social divisions – and the role played by technology in deepening rather than bridging these divides – is on point.

Consider the topic of touch. In my country India, people born in the lower castes are subjected to a hellish system of “untouchability” and shunted out of social touch. Conversely, millions of people here live in homes which occupy less than the recommended minimum space for a prison cell. They have no way to avoid touch, even if doing so is the difference between living and dying – as it is right now. Read my earlier piece: In a country of 1.3 billion, space isn’t just scarce – it’s taboo. Try squaring that with a pandemic

The coronavirus pandemic has unleashed a wave of “skin hunger” that seems universal, but it hasn’t affected everyone equally. As I wrote in a recent piece, Why we need hugs and handshakes to stay healthy the hardest hit are people who live alone, or at heightened risk of contracting the infection, or with disabilities which make them already more vulnerable to isolation and touch deprivation.

Meanwhile, very much like in Upload, you can buy your way out of social isolation - pandemic or not. If you have $20,000 to spare, you can make all your sensory fantasies real without worrying about infections, thanks to sci-fi-esque robotic “companions”, AKA sex robots. See this video on journalist Katie Couric’s date with sex robots.

A clone of the “hug suit” from Upload is already available for £250 a pop. Designed by London fashion firm Cutecircuit, “the Hug Shirt” lets you send hugs remotely via “embedded actuators that recreate the sensation of touch and the emotion of a hug to the Hug Shirt of a distant loved one”. As sex-tech journalist Emma McGowan writes : “The only logical advancement in haptics is to full-on virtual sex. Full-body haptic suits are no longer a far-fetched sci-fi nerd’s dream”. If you can afford one.

Technology and the free market aren’t the great equaliser they are touted to be – whether in this world or in the afterlife. When Nora takes Nathan for his first visit to the 2 gigs, he’s appalled by what he sees and asks why the management won’t at least give them coffee. “I mean, it’s just code!” 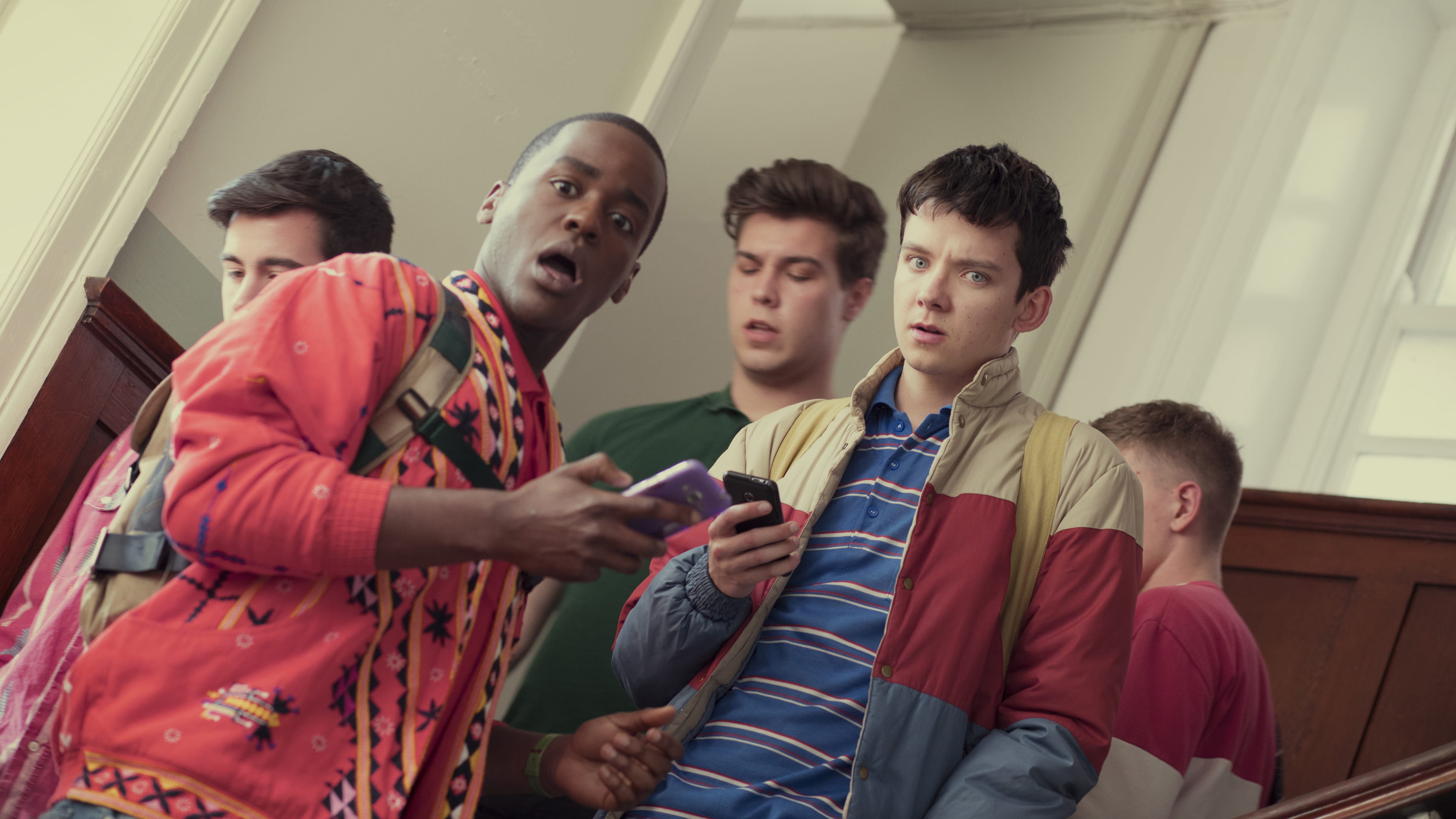 12 things I wish I knew about sex before I started having it The Netflix series Sex Education got me thinking about those early awkward moments of confusion when I became sexually active. Inspired by the series, here’s a list of some of the things that I wish I had known back then. Read Irene Caselli’s article here