All images are stills of scenes from the series Sex Education. Source: Netflix

Our whole existence depends on it, but we teach each other little to nothing about it.

I’m talking about sex, of course.

Sure, you can’t escape sex in popular culture –  although very little of it goes beyond the boy-meets-girl archetype. And enough of it can be found online too.

But what we definitely have too little of is some decent explanation of how sex works.

Sex is such a personal act that it’s hard to talk about it without feeling vulnerable, guilty or ashamed. Let alone ask questions about it. No wonder there is such a huge discrepancy between how important sex is and how much we know about it. This review of selected sex ed programs in the United States, the United Kingdom, Hong Kong, Mainland China and Taiwan shows many gaps and inadequacies.

I for one would certainly have benefited from the right type of sex ed when I was young. It would definitely have made me feel much more "normal" and less isolated.

When I got my period for the first time at the age of 10, I had no idea what it was.

Menstruation comes from the Latin word for month, mensis. Because I speak Italian, which derives from Latin, I thought my period would last an entire month. Imagine: I calculated whether I would still have it during my birthday – and I was devastated to think that I would.

When I was 11, I found a copy of the Kamasutra and read about penetration for the first time. My curiosity led me to interrogate my 18-year-old neighbour’s girlfriend: “Does it hurt when he puts it inside you?” I asked with genuine interest. She shouted at me that I was disgusting and that she would tell my parents.

And later on, when I was ready to become sexually active with my older boyfriend, I was terrified of getting pregnant. I found the address of a family planning clinic and went to ask for birth control. When they found out I was 15, they also warned me they would tell my parents.

We had no sex lessons at school. I had no older friends or cousins to talk to. My parents were off limits. The internet existed, but I didn’t know anyone with a computer. So you can imagine how great it would have been to have some form of sex education.

When I came across Sex Education, the immensely popular Netflix series now in its second season, I marvelled at the idea of being able to reach out to someone with my questions around sex. In the show, Otis, an awkward teenager and the son of a sex therapist, starts giving his peers sex advice for money. I thought to myself: imagine just how different my life could have been if Otis had been around – or if this show had been on TV then.

Watching this amazing series inspired me to share the 12 most important lessons that I wish I had learnt about sex before I started having it. And I hope this piece might inspire you to do the same in the contributions section below.

Spoiler alert: this article contains some details about the series.

Not only does Otis give sex advice for money, his mother also steps in when there is a chlamydia outbreak, and several other characters take active roles in counselling their peers, making them feel accepted and in the know. This very premise of the series already conveys the first important lesson I took from it: it is perfectly OK to ask for sex advice. We ask each other for advice on almost everything else in life – so why not about sex too?

2. Universal rules or techniques may not take you very far

In one episode, Otis studies fingering techniques to experiment with his partner. He becomes so obsessed with the technique that he starts to do it almost robotically – much to the dissatisfaction of his partner. When he seeks advice from a peer, Otis learns that the key to satisfying your partner is asking and figuring out what works for them. Lesson two: there’s no one way to "do it". It depends on the person we do it with, and not all of us like the same thing. So while doing your research may be quite useful, don’t take your findings as definitive answers.

Otis’s mother is sex and relationship therapist Jean Milburn, who gives some great sex advice in the first episode of the second season when there’s an alleged outbreak of chlamydia. She calls them the three Ts: trust, talking and truth. Trust, talking and truth, she says, are essential for teenagers to "free themselves of the unwarranted stigma" attached to sexuality and contracting a sexually transmitted disease. What she means is that it is necessary to create an environment where adolescents can get access to real information (truth), while being able to discuss that information (talk) in a place they feel safe in (trust).

5. Humour is great in bed

Otis’s best friend Eric is incredibly irreverent. When Otis is horrified because he had a wet dream, Eric laughs if off and helps him feel OK again. His positive and open attitude is a great reminder that humour is a great element to add to sex, and that having a laugh can take away from some of the worries in bed. Think of the awkward moment when you queef: a quick joke about it, or a reference to this woman who wouldn’t stop laughing when she heard the word queef, may be a great way to move on and keep having fun.

6. There’s nothing about sex you can’t discuss

In one of my favourite moments in the show, six female characters who have nothing in common are stuck in the same room and given an assignment: they need to figure out what they have in common as women. The only thing that eventually makes them bond is the realisation that they have all been sexually harassed at some point in their lives. In another episode, Maeve convinces her friend Aimee to go to the police after a guy ejaculates on her on a bus ride. It’s a good reminder that even if it’s common, sexual harassment has to be reported.

We all have all kinds of conscious and unconscious norms and ideas ingrained in our head about what sex should be like. But, as you progress into the series, you realise just how many forms of sexuality there really are. There is the teacher who likes dirty talk, the girl who covers her boyfriend’s face when she has an orgasm, the boy who thinks about the Queen when he comes … and there are also people who are not interested in having sex at all (actually, 1% of people on average are asexual) – and that is normal too.

9. Abortion should be an option for everyone

When Maeve finds out she is pregnant, there’s no doubt in her mind: she goes to a clinic to get an abortion. At the clinic, she’s asked routine questions and her decision is supported. Of course, the series is set in the UK, where abortion is allowed until 24 weeks of pregnancy. Unfortunately, abortion is not an option for most women around the world – either because it’s legally restricted or hugely stigmatised or both. We have to keep fighting for this right and normalise it. You can read my story about how abortion is close to becoming legal in Argentina, thanks to a strong movement who fought for it.

For Jean Milburn, sex education is not just about teaching how to avoid a pregnancy or how reproductive organs work. More than anything, sex is about pleasure. After all, the clitoris is the only organ in the human body that exists solely for pleasure. Check out Dr Jen Gunter’s The Vagina Bible for more about this. But women especially are stigmatised and shamed for putting pleasure before reproduction. Unsurprisingly, there are few studies on women’s pleasure versus men’s pleasure. This article offers a good overview. And there are even fewer studies about the health conditions that lead women to feel a sense of discomfort or outright pain during penetrative sex. If we educated each other about how pleasure is an integral part of sex, then we could take away some stigma and pain too.

11. Vulvas come in many shapes and sizes

Ruby is desperate because an image of her vulva gets shared across the school. But when the school principal brings this up in an assembly, many girls stand up saying: "It’s my vagina!" You can watch this scene here, though the girls should be saying: "It’s my vulva!" The vulva is the external part of the genitalia, the part you can see when you’re looking in the mirror. They cover for their peer and reinforce the idea that there are no ugly or beautiful vulvas. In fact, if you want to get some sense of just how wildly different vulvas really are, just have a look at The Vulva Gallery by Dutch artist Hilde Atalanta, You can see The Vulva Gallery in this piece we published on endometriosis. which shows vulva diversity at its finest.

The series shows that it’s not just adolescents who need plenty of sex therapy: adults need it too. Our ways of understanding sexuality evolve as a society, making it necessary for us to constantly educate ourselves about it. For example, we have recently started talking about a much wider spectrum of sexual identities than before. We’re now hearing more about terms such as demisexual, pansexual or sapiosexual. And every moment in time comes with unique challenges. For instance, what is sex like when you get older? Sex ed should be there to stay.

In a previous version of this article, I mistakenly said that vaginas come in many shapes and sizes. Of course I was referring to vulvas instead. Thanks to artist Hilde Atalanta for pointing out my mistake. If you are a member, you can read Hilde’s comment in context here. 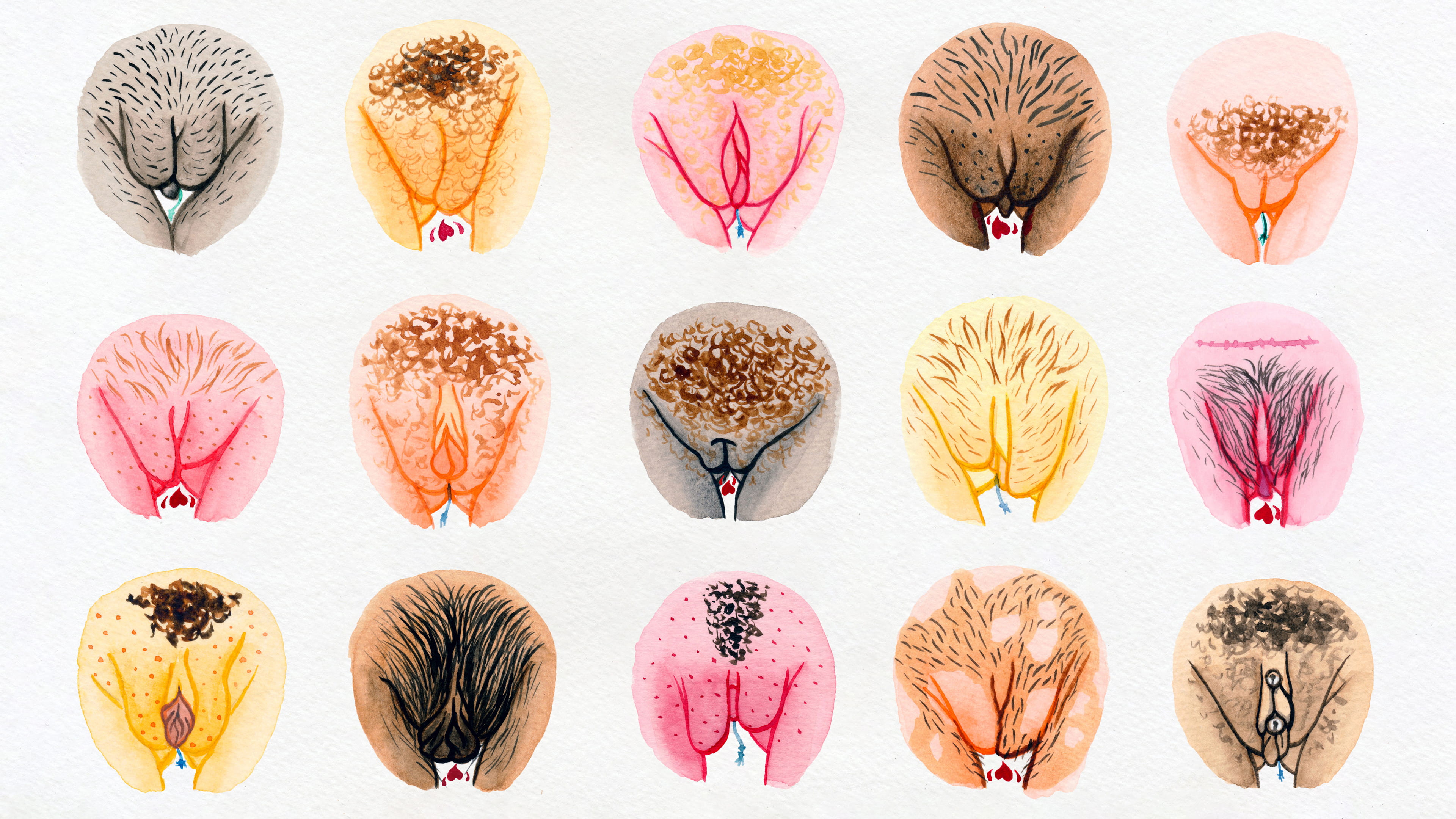 What happens when pain is a ‘women’s issue’ 176 million people have endometriosis, a condition that can cause a lifetime of suffering. Yet, there are neither satisfactory treatments, nor ample research funding. Could there be a link between treatment of pain and gender? Read Rachael Revesz’s piece here