The British photographer Laura Pannack wondered what Brexit means for love. All images with this article are from her series Separation.

The former editor of an acclaimed Dutch current affairs TV show, Tegenlicht (Backlight), once told me that whenever Europe was the topic of an episode, or the word “Europe” was uttered in a trailer, ratings immediately dropped by at least 40%.

It’s safe to assume the same applies to my headline: merely mentioning “Europe” is to a columnist what a bad weather forecast is to the owner of an outdoor cafe: bye bye, visitors.

Or as professional pundits like to put it: Europe doesn’t have a story. There’s no shared identity that makes us feel European – no symbols with which we can identify; no shared values that truly unite us.

US Americans have their dream and the Statue of Liberty. The Chinese have their Party and their communist ideology. The British have their tea and their everlasting Queen.

What is Europe, really?

Countless explanations For example, this report by the European Cultural Foundation, an independent Netherlands-based foundation. have been given for this lack of “a story”.

An economist would probably say: the European Union (the EU) started out as – and still is – primarily an economic union. Therefore, the political, moral, and ideological dimensions were – and still are – largely overlooked.

Sociologists would likely add: the continent is simply too vast, its competing interests too myriad, and its cultures too diverse – in terms of language, customs, peoples – to ever truly become one.

Psychologists would point out: people identify more readily with the near and the familiar – their own country, region, or recent history – than with a union that seems remote and abstract.

Last but not least, political scientists would conclude: Europe lacks identity-bolstering symbols, inspired leaders, and the pan-European media it would take to spread Europe’s story across the continent.

All those explanations have their merits – as well as their shortcomings. But the more I think about why Europe lacks a story – or put another way, why I don’t feel European in the way many US Americans feel connected to the US – the more I tend to see a different explanation: Europe has no story because Europe is precisely what it is not.

Now that may sound like slightly mad banter from a professional philosopher. But let me explain.

The story of the vanishing borders

When I used to go on vacation with my mother – who was born in and fled from what used to be Czechoslovakia – back to her homeland every summer, the drive always included at least four hours of fearful waiting at the border.

Armed guards, as suspicious as drug-sniffing dogs on the trail of cocaine, meticulously checked all passports and vehicles trying to enter the country. I remember a nerve-wracking four hours since the trunk of our car was always stuffed full with all kinds of household imports – coffee, detergent, sanitary pads – that were next to impossible to get your hands on there at the time.

Large parts of Europe welcome you without suspicion or border controls

Now, 20 years later, there are no longer any borders within most of the EU (and no shortage of coffee, detergent, or sanitary pads in Slovakian shops). Whether you travel by plane, train, or automobile, the 4.3m square kilometres of Europe (over 1.6m square miles) welcome you without border controls and without suspicion. There are no more armed checkpoints along the highways, and going through customs at the airport is a formality.

The story of the vanishing worries

The same is true of just about everything that makes Europe such an incredible place. If you travel to large parts of the world, be prepared to still worry about diseases for which you must be immunised, threats that prompt government travel advisories, tainted food that will land you in the hospital, tap water to avoid at all costs, human rights that are far from certain, and so on and so forth.

Throw a dart at a map of Europe, however, and you can rest assured: it is generally safe, clean, and just. You don’t need any shots, apart from a few major cities perhaps; you don’t have to be wary of the hotdog stand or to fish the ice cubes out of your cola; you need not fear the authorities. You seldom even have to change your money; your euros won’t be refused, your ATM card won’t be spit out, your credit card will not be rejected. You can, in other words, pack your bags and Let’s Go Europe.

The story of the vanishing foes

The Polish-British social psychologist  Henri Tajfel  devoted his entire academic life to finding an answer to the question of how group identity forms, be it in a sports team or a nation state.

His conclusion? The most important factor in engendering a group feeling is a common enemy. It’s no wonder, then, the US has such a strong national identity: the country started as a war against a native population and has since always found new enemies to rally around, from the British crown to the Russians to Islamic radicals to North Korean dictatorships. The same goes for so many strong national identities around the globe, whether it is India versus Pakistan, Israel versus Palestine, or the religious Middle East versus the non-believers in the west.

Yet, despite its bad reputation among some of its inhabitants – bureaucratic! out of touch! – Europe really has gone without a true foe for decades now. How often do you see protesters with placards that read “Death to Europe!” or burning EU flags on the evening news? Sure, Europe has its lovers and its haters – but enemies? On the contrary, people are flocking to the continent because it’s viewed as a safe haven for those who do have real enemies at home.

Europe, the continent you hardly notice

In short, what makes Europe truly European are all those things that you don’t see when they’re all around and only notice when they’re not. Peace, freedom, security, prosperity: all the things that make life smoother, easier, more carefree. That, I believe, is the most important reason Europe has “no story”, and so few people who live there feel “European”: the more successful Europe is, the less you notice it.

The more successful Europe is, the less you notice it

To be clear: of course there are many amazing countries and places in the world – none of this progress is uniquely European. And of course I realise that there is another side of the European coin too: unemployment in Spain, debt in Greece, the mafia in Italy, corruption in Bulgaria, slumbering fascism in Hungary. For more background to the situation in Hungary, see this interview between Hungarian prime minister Viktor Orbán and French philosopher Bernard-Henri Lévy. And it is the lingering discontent that gave rise to the British exit of the Union. You can make this list as long as you need to convince yourself that my painting of Europe as paradise is woefully misguided.

But all that misery is visible enough. It’s the almost-utopia we so take for granted that we soon forget it’s all around us. Drink from the tap in China, take the train as a single woman in Pakistan, or go as a gay couple to Russia. Then you suddenly realise with certainty: “Oh, yeah. I’m European.”

What the British are leaving

The British are leaving the EU.

I get it. All progress has a downside. All that new prosperity is not exactly evenly distributed over the continent. Bankers, as you can imagine, are very much pro-EU. And without national borders, crime also has more freedom of movement. There’s enough wrong on the continent to produce a front page every day portraying Europe as the big bad outside world. I would want out, too, if I read the UK’s Daily Express. A right-wing British tabloid, known for its anti-EU and anti-immigration views. See examples of its front pages here.

The problem is this: try and make a front page each and every day about what else Europe is. What would you see then?

The two fish look at each other in confusion. Then one leans over to the other and goes, “What the hell is water?” The full transcript of David Foster Wallace’s speech can be found here.

Europe is that water.

This piece was translated from Dutch by Erica Moore and Maria Sherwood-Smith.

Separation The British photographer Laura Pannack wondered what Brexit means for love. While the exact ramifications of Brexit remain unclear, her portraits explore the uncertainty that the break-up brings on a human level. Each couple is a British person and someone who moved to the UK from elsewhere in Europe. They are facing an uncertain future together. In that sense, Pannack’s images powerfully capture how Europe is precisely what it is not. As soon as one parts from this union, borders rearise. See more work by Laura Pannack here 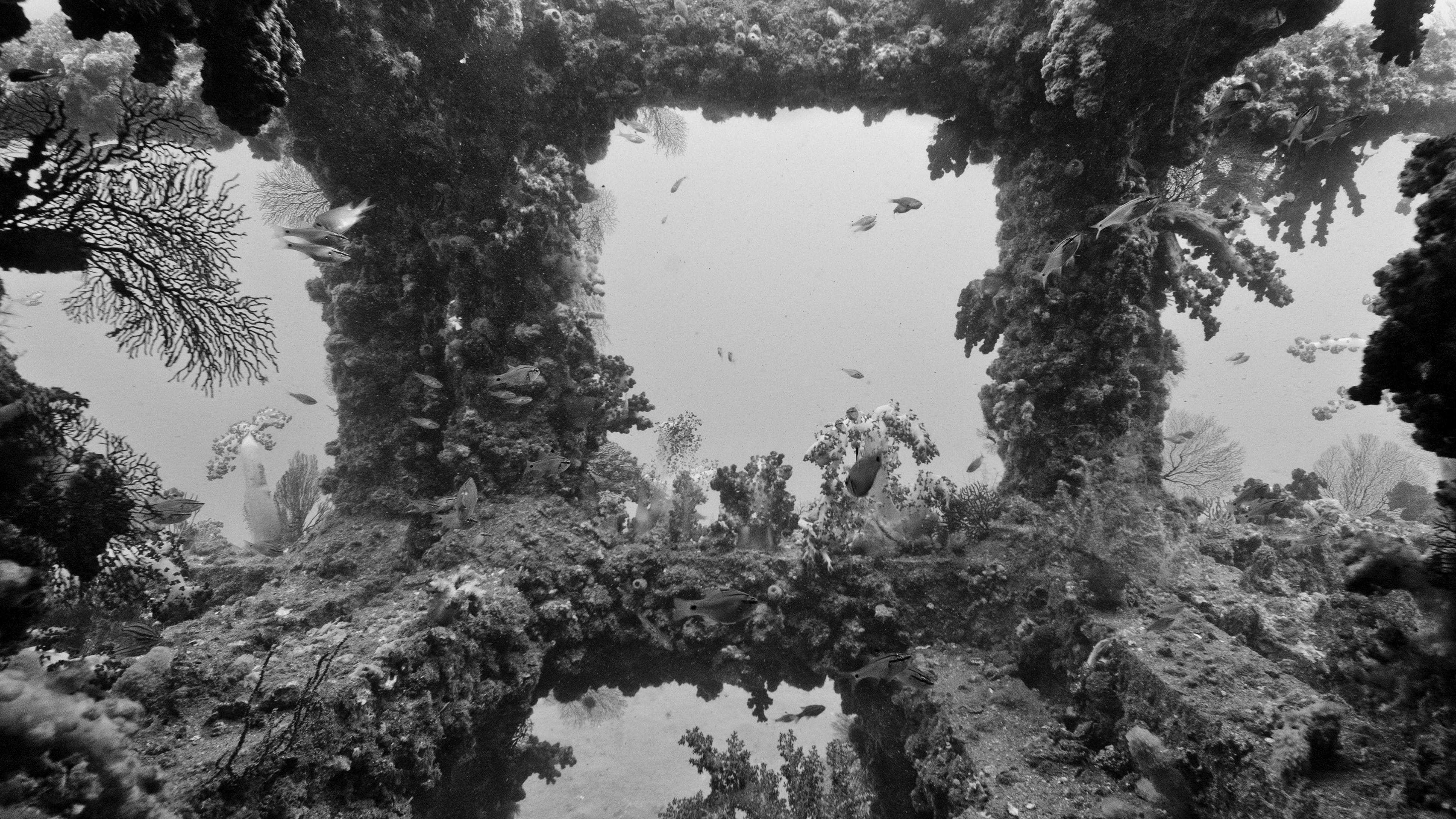 The great paradox of our time: everything is both better and worse than ever before In the past two centuries, fossil capitalism has made us wealthier, healthier, safer and more informed than ever. Now, however, this driver of progress has begun to cause our demise, making us feel cynical, or powerless. Yet there is always room for hope – that is the nature of humankind. Read more here